Welcome To The Third Installment In Our Blog-Post Series On HuBod Printing. Here We’ll Continue From The Point-Of-View Of  3DP Democratization Of The Healthcare Industry, Including What I’m Calling “Maker Care”—An Offspring Of The Maker Movement… 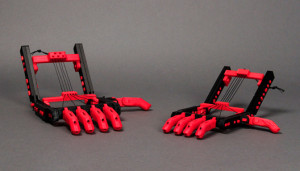 A Pair of “Robohands,” A Seminal Example of DIY/DIT 3DP-Driven “Good-Enough Tech” (GET). These Robohands were made on a desktop MakerBot printer by collaborating Makers on different continents and are working and effective prosthetic solutions for missing digits.

“HuBod Printing”—for Human Body—is my coinage for the spectrum of powerful mashups and integrations 3DP players are creating between Additive Manufacturing and Healthcare.

Some of our most creative 3DP players work at the grassroots and community level as the proudly un-credentialed. 3DP democratization of the Maker Movement has empowered entirely new Maker forays into evermore sophisticated fields of “inspired tinkering.” 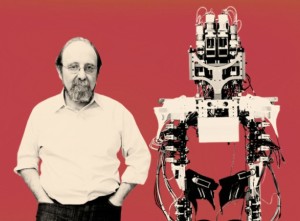 Neuroscientist Dr. Miguel Nicolelis & one of his mind-controlled, exoskeleton robots (the “Walk Again”) that enables the paralyzed to ambulate via thought commands. The “Walk Again” will debut on 12 June at the World Cup in Brazil, when a paraplegic will literally make the first kick to open the Cup while wearing a Walk Again.

Among these novel initiatives are “BioFacturing” efforts that stem from non-invasive “exo-solutions”—think the insect exoskeleton with its body’s chitin armature as external infrastructure. 3DP/HC exo-solutions spectrum from simple—but DIY-innovative and product-creation paradigm-bending—prosthetics (“Robohand“) to body-mobility exoskeletons that empower paraplegics and quadriplegics (wearable robots and digi-mech body suits like the “Walk Again” and the “Ekso-Suit“).

In the new business of exo-solutions to healthcare problems, 3DP-driven BioFacturing presents a number of advantages. This includes organic ramping-up of tech evolutions, iterative processes to enable wide experimentation, inexpensive use of resources, effective response to changing parameters (e.g., a child’s growth) and hyper-customized, patient-specific designs. 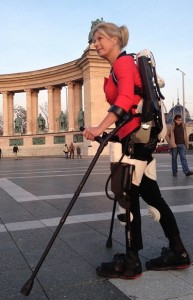 Paralyzed former-skier Amanda Boxtel & 3D System’s “Ekso-Suit”—described by the company as the “first ever 3D printed hybrid Exoskeleton robotic suit”—demos her hyper-customized wearable robot on its debut in February 2014.

In this series of posts on 3DP and Human Health, the exo-solutions we are now examining have another crucial attribute. They are all non-invasive. And, thus empower wide investigation with and by real people without the constraints of our U.S. healthcare system’s “walled garden” of credentialism and gate-keepers.

Robohands is the now-classic (debuted in Spring 2013) example of Good-Enough Tech (GET) in highly successful use in 3DP-driven, human-health solutions.

Two Makers—one (Ivan Owen) in Washington State and the other (Richard Van As) in Johannesburg, South Africa—learned about each other via the Internet and teamed up to collaborate on a GET project. Richard had lost fingers in a carpentry accident and Ivan had experience with mechanical prop hands. Both were Makers.

Then, MakerBot—the desktop 3DP printer manufacturers here in Brooklyn—donated two Replicator 2s: one for each Maker. This new capability slashed the iteration times to minutes from weeks. The power of the Internet eliminated the traditional latency of the 10,000 miles between them.

So enabled, the two collaborators were able to supercharge their efforts and accelerate their deliver of a viable solution to Richard. The rest—as the cliche goes—is history…but a very important “history” AND future. From first success, Robohand has become a low-cost, worldwide, patient-specific and GET solution for—in particular—children with lost fingers or who were born without fingers.

We’ll be continuing the discussion on 3DP’d exo-solutions here—as part of our 3DP and Human Health blog-post series, so…