DIYbio is beginning to bubble up in amateur Bio-Hacker spaces around the world. One email list for the community sports 4,000 plus enthusiasts. The full-blown DIY BioLabs now number 8 to 10 and the associated groups, spaces and meetups add up to 50 or more. Clearly, another tech-based movement is brewing…and this one is all about “wetware”—defining both the “fluid” nature of the work and the organic human brains now engaged with DIYbio… 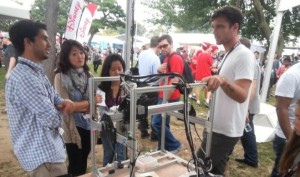 The OpenTrons open-source, liquid-handling robot built by Will Canine (a Genspace member). The robot—which won an Editor’s Choice award from “Make:” Magazine at the World Maker Faire in Queens at the end of September—will be the focus of a Kickstarter campaign in November.

DIYbio is a new sibling in the DigiFab/3DP Family. Healthcare/3D printing hybrid products and systems comprises the fastest growing segment of 3DP today. BioPrinting of functioning tissues and organs—using patient-specific DNA and living cells—is the climax objective of the sector. And, not yet realized—but already conceived, planned and advancing: rapidly.

[In my first post—Part #1—on this topic of DIYbio and BioPrinting, some of the comments I quoted seemed to question whether or not DIY Bio-Hackers should attempt to “play” in the 3DP-driven bioprinting world. Mostly—I think—because the commenters felt the level of technical sophistication and evolving-science knowledge likely would far surpass Bio-Hacker capabilities. But, please let me posit that competing with the Bio/Industrial complex IS precisely where the inherent inventive and innovative nature of Bio-Hacking WOULD certainly add value to the practice of BioPrinting! —LG.]

Buttressing this accelerating DIYbio action is the fact that venture capital is once again investing in science-based biz launches. The 13 October New York Times—in an article entitled “Venture Capitalists Return to Backing Science Start-ups“—states that “Investment in biotechnology start-ups rose 26 percent in the first half of 2014, to $2.93 billion, from the period a year earlier and is on track to exceed the 2008 peak of $5.14 billion.”

At the end of Part #1 of this post last week, we were examining the issues of DIYbio personal and public safety. I quoted Todd Kuiken, Senior Program Associate, at the Science and Technology Innovation Program of the Woodrow Wilson Center about Bio-Hackers and their self-regulating safety regimens. Averred Todd—on Ira Flatow’s 3 October 14 SciFri (Science Friday) Public Radio International (PRI) program, entitled “Community Labs Practice DIY Biology—“The [DIYbio] community is being extremely proactive in terms of issues around bio safety and security to assure the work [Bio-Hackers are doing] is safe.” 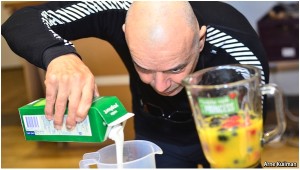 DIY BioLabs are beginning to sprout worldwide. Some lower tech than others. Europe tends to be more regulation-constrained than the U.S. So, this effort to make evil-tasting spirulina—a vitamin & protein-rich algae—palatable to humans (at Open Wetlab in Amsterdam) is more cooking than Bio-Hacking.

The Wilson Center recently surveyed 359 DIYbio movement members to judge the sophistication—among other attributes—of the most involved Bio-Hackers. Common tasks involved extracting DNA from fruits. Gene synthesis? Only 13% had managed it. Mammalian cell gene engineering? Only 3%. For the moment, DIY BioLabs are NOT training Dr. Frankensteins, tinkering with bootleg Ebola or breeding bio terrorists.

Mr. Kuiken continued to reinforce the responsibility and prudence of the organizations and individuals in the DIYbio movement. He described the greater DIYbio Lab community and its local codes of conduct, safety workshops and transparency efforts.

Todd suggested that these efforts buttressed openness and education. And, when the public can see what pioneering Bio-Hackers are doing, the Life Sci smitten and bio-tech compelled can join in the DIYbio Lab revolution—while everyone applauds. (Including VCs: see the Times article above.) At the same time, public officials can get familiar and comfortable with DIYbio. AND, begin to appreciate the commercial and common-good opportunities this movement offers BioPreneurs (looking for a congenial home) and their local citizenry (looking for community companies to employ them…citizens AND voters!).

Just Mr. D’haesleer’s moon-lighting resume showcases pro/am Life Sci chops—and could be the storyline for a Hollywood biopic on a life in DIYbio. He is the Leader of the Bioprinter Project at BioCurious—another full-fledged community DIY BioLab in Sunnyvale, CA. (Typical calendared event: “Synthetic Biology, Biohacking And Vegan Cheese – iGEM Team Meeting”—this last is the International Genetically Engineered Machine event, a yearly synthetic-bio competition for college undergrads.) AND, Patrik is also the Co-Founder of the BioCurious sister-hackerspace for biotech, the new Counter Culture Labs in Oakland, CA. 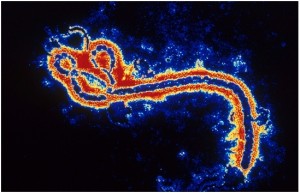 The Infamous Ebola Virus—progenitor of screaming headlines and raw fear in the U.S. Nonetheless, Ebola is still MUCH MUCH less important than our “everyday” Influenza Virus, which—in a bad year—can kill 50K Americans. Want to worry for a reason? Consider the REAL and PROVEN danger of pandemic flu…

Now, the angst over Ebola is abroad in our land. Even though—at this writing—only a single healthcare provider (whoops, make that TWO as of 15 October) in the U.S. has become infected with Ebola. To take the fight against this epidemic to its source—in an understatement: “West Africa faces the largest Ebola epidemic in history”—USAID (United States Agency for International Development) is organizing “Fighting Ebola: A Grand Challenge for Development.”

USAID is partnering—in this Ebola initiative—with the White House Office of Science and Technology Policy, the Centers for Disease Control and Prevention and the United States Department of Defense.

“We are calling on the global community to share pioneering ideas that deliver practical and cost-effective innovations in a matter of months. Regardless of background, experience or knowledge of Ebola, your bold thinking is necessary to address this crisis, to improve delivery of care, and stem the spread of disease.

Here’s what these U.S. Government organizations are seeking to launch:

A challenge competition to fund and test innovations for PPE, infection treatment and control; and

Partnerships for rapid testing and deploying the best solutions.

Create Solutions To Fight Ebola. There are two ways YOU can help:

(1) Engage with an online global community of solvers hosted by OpenIDEO to share your insights and ideas so we can tackle this issue together.  JOIN THE CONVERSATION NOW.

USAID Administrator Dr. Rajiv Shah sums up the “Challenge” call with this statement:

“Together with our international partners, we will translate the expertise and ingenuity of scientists, innovators, engineers, and students from across the globe into real solutions. With your bold thinking and engagement, we can give health workers the tools they need to win this fight.” 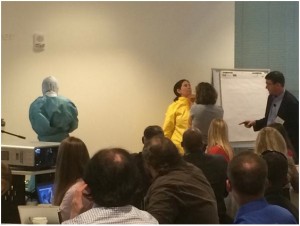 Ellen Jorgensen—modeling a yellow PPE (Personal Protective Equipment) suit—is President of Brooklyn’s Genspace, the world’s first DIYbio space. A crowd-innovated, hyperspeed-development PPE—because fail-safe Ebola sequestration would appear to need a better one!—was one of the focused efforts at the USAID’s two-day meeting on “Fighting Ebola: A Grand Challenge for Development” in early October.

At this moment, DIY Bio-Hackers are serendipitously positioned as newly important islands of biotech knowledge in a (raging!) sea of bio/med/LifeSci ignorance. To be seen as the folks wearing the “white hats” (to the rescue via reason?!), Patrik D’haesleer is helping to identify DIY BioLabs as important—and already deployed—tools of education and action at the befuddled grassroots.

Still—adding to the fear headlines and saturation scare coverage of the Ebola epidemic (biology run amok crossed with media gone awry)—the threat of bioterrorism also poisons the brew of reasoned discussion. And, prospectively—and negatively—tamps down the ability of DIYbio to grow vigorously at the grassroots.

Tight regulation or flat-out prohibition of DIY BioLabs would simply drive a currently thriving and transparent community underground. DIYers—of all stripes—tend to be anti-establishment by nature. They are seeking forgiveness, not asking permission—a fine old American tradition.

European bureaucracy and regulators have managed to keep Bio-Hackers mostly out of synthetic biology. In most EU countries, DIYers have to obtain a license to operate a genetics lab. Whoops: score another for ‘Preneur-bashing.

In September, The Economist Magazine published an excellent—as usual—compendium overview of the worldwide DIYbio phenom: “Biohackers of the world, unite.” In it, the authors showcased an enlightened FBI(!) demonstrating how a light touch, cooperative attitude and supportive actions can be both winsome AND effective. Here’s a direct quote that gets directly to the points of light:

“In America biohackers used to risk getting arrested, but in recent years the FBI has opted for a more enlightened approach: local special agents talk to community labs; the agency organises an annual DIYbio conference; it is even a sponsor of iGEM. ‘The people who practise DIYbio are best placed to know what is going on,’ says Edward You, who pioneered the FBI’s effort. He also thinks that the agency and the DIYbio movement have a ‘shared responsibility to protect science’. In other words, if things go wrong there will be tighter regulations—making life more difficult for both law enforcement and biohackers.” 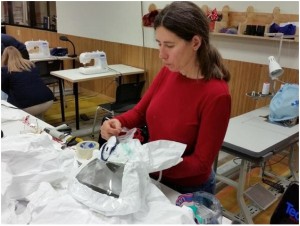 The granddaddy of all the 8 or 10 fully outfitted DIYbio spaces around the world is Genspace of Brooklyn. Founded in 2010 (just to show you how new this all is) as a community laboratory, it has served as a model for how to start and operate such an innovative lab. “Our goal is not only to advance biology, but democratise it,” explains Ellen Jorgensen, Genspace President, in the ultimate spirit of DIY.  Genspace creates and hosts innovative events like “biohacker boot camps” and stewards efforts like the Urban Barcode competition in cooperation with NYC schools.

This last is a great example of combining education, real science orientation and useful leading-edge tech. The Urban Barcode Project (UBP) is a science competition spanning the five boroughs of New York City. Just as a unique pattern of bars in a universal product code (UPC) identifies each item for sale in a store, a DNA barcode is a DNA sequence that uniquely identifies each species of living thing. In the Urban Barcode Project, student research teams use DNA barcoding to explore biodiversity in New York City.

Genspace—and DIYbio movement it helped spawn—presents NYC with another great means to leverage its natural advantages in Healthcare and 3DP. For commerce and common-good, Bio-Hack away…

OBTW, Ellen Jorgensen of Genspace is already deeply involved with the USAID “Grand Challenge” against Ebola. See my captioned pix of her above. (These snaps are courtesy Patrik D’haesleer, who was apparently on the scene at the USAID-sponsored Ebola-response “Challenge” workshop—participating and recording to the max).