Maker Media, Inc. (MM) continues to coalesce new communities from its “Maker Movement”—a booming phenomenon that it both helped to birth and continues to support. Now, MM is reworking its offerings again—in response to the opportunities afforded by the explosive growth of its Maker Faire “franchise.”

MakerCon New York 2014 debuted in the week prior to the 5th Annual World Maker Faire NY ’14.

Just a few months ago, Maker Media announced that it had reached the milestone of 100 Maker Faires-worldwide. Today, Dale Dougherty, CEO of Maker Media, personally announced MM will debut 35 new Faires of various sizes in THIS year. This includes another “flagship” event in London in 2015.

Why should those in 3DP commerce or common-good care about the Maker Movement? Because—as I discovered in my interviews of Maker Media execs in July—fully one third of Maker activity at World Maker Faire New York 2014 will be driven by 3DP in one form or another. And, the action at MakerCon NY 2014 buttresses the trend to even greater mutual and aligned growth in this natural integration of Makers and 3DP.

Previously, MM had held a hardware innovation event for Maker “pros”—those building businesses in Maker disciplines—in the official “Weeks” before its two flagship Maker Faires in San Francisco and New York. In addition, Maker Media presented ancillary workshops on building, marketing and managing Makerspaces. In the “Weeks,” MM also held “education days” for teachers interested in Making as a platform for programs—from STEM-based curricula to afterschool to fostering young makers. 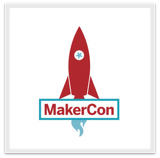 Now, Maker Media has amalgamated all of these Maker events under a two-day, over-arching event that the company is calling “MakerCon”—short for Maker Movement Conference. MM rolled out the first MakerCon at Maker Faire Bay Area 2014 in May. The company is now presenting its second here in New York City at World Maker Faire Week on 17 and 18 September.

Dale Dougherty—as MakerCon ”Master of Ceremonies”—opened the new Maker get-together with these cogent remarks: ”MakerCon is now an umbrella event. In the past [in the week prior to our flagship Faires], we focused on hardware innovation—mostly for the ”pro” Makers. BUT something bigger was happening. That’s why we created MakerCon. [To celebrate the broader Maker Movement drive] to do things that come out of our own heads and share with others. MakerCon is also about civic and education impacts: on and for the community.

“Last wkend there were 10 Maker Faires in America: over 135 this year. We’re no longer just the business of Making and the tools, BUT the civic aspects. And, we have the ambition to [help] create the leaders of the Maker Movement. Something that is powerful and important.”

In prior comments, Dale had foreshadowed his MakerCon intro with these supporting ideas: “ The Maker Movement is providing new insights into local and global manufacturing, design, workforce development, education and creative culture. We are excited by the growth of makerspaces in communities, in a variety of settings from libraries and schools to city centers and in industry. National and local government leaders are trying to understand how to support the growth of the Maker Movement. Even large corporations are trying to figure out how the Maker Movement impacts their interactions with customers and the kinds of products they develop.”

In the following, Day-One morning sessions, MakerCon quickly proved that it was suddenly the place to be, be seen and be active in rolling out Maker/3DP ideas, relationships and products. 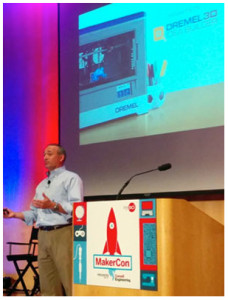 The President of famous, old-line, 80-year-old Dremel Tools (which could be called the Makers’ “Pocket Machine Shop”) took the stage and introduced his company’s debut entry in the hyper-competitive world of desktop 3D printers. John Kavanagh presented the “Dremel 3D Idea Builder,” which “builds on the [Dremel] legacy of easy-to-use tools” with a “comprehensive 3D printing ecosystem empowering a new generation of makers to build revolutionary projects for creative and functional purposes.”

According to Dremel, the Idea Builder features easy-to-use functionality, full-featured tools and family and environmental friendliness—all at an aggressive $999 MSRP and availability at selected Home Depot stores in November. Looks like a homerun off the bat.

And, the new MakerCon New York was Dremel’s debut venue—reinforcing the alignment of Making and 3DP.