From Prototype To Production: An Innovative, 3DP Trade Show Gets Down To Industrial-Manufacturing Business In New York City…

Our 3DP industry-segment is attracting more and more trade events. Don’t bother wondering about the growth and directions of 3D Printing interest and impact. Just take a look (in New York City) at the number and variety of new 3DP-focused events founded or staged right here in the last year or so. AND—more importantly—going forward: 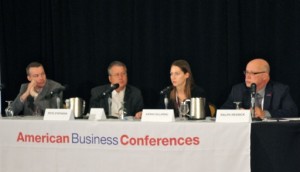 Now, New York City may be slightly ahead of the 3DP adoption curve. But, let me suggest that these kinds of 3DP-driven commercial trade events are going to start showing up in cities and towns and communities and institutions all over the globe.

One reason 3DP-focused, physical, in-person events—of all kinds—will prosper and grow is that our industry converts ethereal digits to touchable objects: thoughts to things, as I like to say. You need to be there to “grasp”—literally and physically—the 3DP’d “goods.” And, the good hands of those real people who are attending the event with you. Humans are gregarious. We herd. We like to associate with one another. And—at trade events—we also tend to make commercial relationships. (Another synonym for doing business…)

Trade shows are those places where corporate and organizational hierarchies become intentional fluid and more permeable—the better to interface with the “outside” world. The world into which— after all—businesses are trying to sell! The socially ept and apt human can work a trade show for all kinds of commercial advantages and advancements. Especially, if s/he actually likes people!

Trade show producers only jump on a hot-topic when they’re sure they can profit from a building and burgeoning community of (generally to start) the puzzled and/or the passionate. (Just consider New York-based Mecklermedia’s expansion of their Inside 3D Printing Conferences and Expos to nine events worldwide—from one in NYC in 2013—in the remainder of 2014 and the first half of 2015. Not to be outdone, 3D Printshow of the UK also has nine 3D printing events scheduled in the next year. That’s from one in 2012. {The 3D Printshow London is going on 4 through 6 September—as I write.})

If trade show activity is a leading indicator of 3DP-sector promise and prospect—and I think it is—here’s another marker of our industry’s certain success.

Last week [26-28 August 2014], one of the conferences I listed above— the Additive Manufacturing Production Application Initiative 2014 (AMPAI)—debuted in Mid-Town Manhattan. AMPAI proved to be (for a first-time 3DP event) a ”below the radar” gem of a trade show.

Proving the unfortunate obscurity of this event was that—according to on-the-scene show-staff—AMPAI had only 80 paid attendees. (As usual—if you consider a new trade event to be a kind of ”startup”—effective marketing is the biggest need such an entrepreneurial enterprise needs…)

[With new-show marketing in mind—here’s a note to this show’s producers at American Business Conferences. Dear Friends, please proactively consider changing the name of your ”AMAPI” event. ”Additive Manufacturing”—despite the ”rightness” of the phrase—is NOT going to win the battle of public branding, media positioning and meme virality. ”Production Application Initiative” doesn’t even tell your fellow insiders much. (And, that’s without discussing the lead-balloon nature of a string of three to five-syllable nouns and adjectives…) I think your subtitle—”Proactively Taking 3D Printing From Prototype To Production”—is much closer to the mark for your mostly industrial community. That said, I would also encourage you to go all the way to ”3DP”—and help take the lead in buttressing that winning neologism as part of your event branding. Yours, LG.

PS. As the best example of effective rebranding in a closely related circumstance, see ”America Makes” (from the previous ”National Additive Manufacturing Innovation Institute”). Ralph Resnick, Founding Director, knew what he was doing when he transformed a boring and bland moniker into a sub-title for an exciting, colorful action statement—with a compelling new logotype to boot.]

The explosive growth in our segment’s shows keeps my colleagues at 3DPI editorial-management working hard to learn about new 3DP trade events. [We use online tools, too, such as ”3D Printing Trade Shows”—BUT no organization is catching them all…](Most PR and marketing folks for a new 3DP show know that they need to tell 3DPI all about it—in hopes of our professional coverage!) Then, 3DPI HQ alerts me—and the other writers on the 3DPI Team—to ”local” 3DP events of worth in our individual geographic-catchment area. Otherwise, I might have missed this rich conference altogether.

In the foment and ferment of 3DP’s acceleration, we apply an event-discovery process. This is because even some of the most appropriate local, regional or nationally focused journos don’t necessarily show up on the ”Must Invite List” of new, inexperienced and/or out-of-town show developers and producers. Especially in a hyper-growth business (such as 3DP) with an influx of ”newbies”—even among the PR professionals trying to support new commercial initiatives in the sector.

The AMPAI show was heavily weighted to an industrial manufacturing audience. Representative job titles included such terms as Engineering, Advanced Manufacturing, Technology, Materials, R&D, Design, Innovation, Rapid Prototyping, etc. At the round-tables in the main conference room were attendees from 3M, Adidas, Airbus, Alcoa, Bayer, Boeing, Johnson & Johnson, Nike, PPG, LEGO, Raytheon, Xerox and more. Many of these kinds of manufacturing-industry companies were the original early-adopters of 3DP—for rapid prototyping and reverse engineering—when the tech was first introduced 30 years ago.

The tone of the AMPAI show was serious. It was as if the sponsors were saying ”Nothing frivolous here. None of that desktop consumer stuff. You can bank on our considered industrial-grade choices in topics, presentations and players!”

The key to the AMPAI vision was the sub-title phrase: ”…From Prototype To Production. Although it wasn’t really emphasized in the show’s explanatory (physical or digital) materials, I think there are two parts to that “production” objective that makes up the manufacturing “holy grail” for 3DP—and this new event’s ultimate dual-focus.

That two-part production is—first—direct to end-use. By this, I mean printing an object that is NOT a prototype or part of a mold-making process or an extruding fixture. But, a 3DP’d object that takes its place in a final application with little or no additional processing. Think: a titanium fan-jet blade with innovative internal cooling channels that could only be manufactured via 3DP.

The second part of my two-part industrial production view is volume. That is 3D printing in quantity. Additive mass manufacturing. Scalable mass customization. Reliability and repeatability via a “printer farm.” The first organization to scale from a run of 1 to a 1,000—with some appropriate amalgam of customer-pleasing quality, hardware/software synergies, hybridized materials and quantum-slashed build-times—wins “first mover” dominance. And, the Neo-Henry Ford Award for innovating the 21st C. industrial-manufacturing equivalent of the moving assembly line.

From the AMPAI ”literature,” here is their key paragraph [bolding is theirs]:

”From a technical perspective, additive manufacturing has reached a tipping point where the technology is maturing but big changes to software, applications and scale are expected to happen any moment. As end users are trying to take additive manufacturing one step further and apply it to production, they need to know how to reduce costs while improving quality, both through materials and equipment optimization, as well as to identify the right applications for the technology.”

Note that AMPAI was levying a (standard full-price) $2,500 fee for three days of conference and workshop. First, a workshop on Day One (hands-on 3DP equipment at a separate site; i.e., an NYC 3DP-retail venue) and two full days of conference sessions, Days Two and Three. Or, $1,800 for just the two conference days. (They also offered “Super Early Bird” and “Early Bird” discounts).

Clearly, the promoters of AMPAI were targeting the deep pockets of enterprise, industrial and professional attendees.

For your ”deeper dive” into this rich and instructional 3DP environment, here’s a link to the entire AMPAI event directory. And—for better understanding of our booming industry—it’s useful to see how a purpose-built, contemporaneous, NYC-venued, AM/3DP conference event was structured, talent-positioned and charged for.