The Edifying Enterprise: How MakerBot Promotes Its Offerings & Differentiates Its Brand Via Marketing-By-Education & Delight-By-DIY/DIT-Mastery

MakerBot—Our Brooklyn-Rooted 3DP-Innovator/Manufacturer—Creates Customers & Goodwill By Tutoring Newbies Of All Ages In A New Technology, Explicating The Mysteries Of Digits-Into-Atoms And Creating Cadres Of Believers In New eCottage Industries Founded On The Kitchen Table… 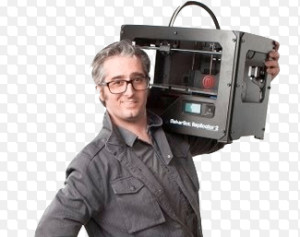 Bre Pettis, Cofounder & CEO of MakerBot, with Replicator 2 on the way to Marketing-By-Education…

Bre Pettis—co-founder and now CEO of four-year-old MakerBot Industries of Brooklyn—was once a Middle School teacher of art in the Pacific Northwest. From early on, Bre was inserting the “A” of Art & Design into STEM to empower STE(A)M. Mr. Pettis is now a Brooklynite (“tru an tru”)—while demonstrating the truth of the hypothetical, hyperlocal “Techreative” construct.

NeoBrooklyn—the epicenter of techie creativity in New York City…and perhaps the world—can now hype the “Techreative.” This is that increasingly sought-after creature, the Brooklyn human-hybrid hipster who can parse digital tech while analog-ing the curve of beauty. Voila! The perfect 3D-Printing maven…the artful scientist and/or the scientific artist. These are the fecund folks who drive our counter-intuitive Zeitgeist of  DIY (Do-It-Yourself) and DIT (Do-It-Together).

MakerBot’s first business—just four years ago—was producing and selling 3D-Printer Kits. (Ahh, the “Cupcake!”) The “kit” is tutelage in a box. It takes the hierarchical authority of the buttoned-up pedagogy-pyramid—axioms down—and turns it on its open-collared head—actions up.

What we get in the kit is “Project Based Learning”—learning by doing—in a DIY-progressive format with its inherent and gentle guidance. Hey, follow the (numbered steps on the) Yellow-Brick Road to your personal OZ of Lofty Accomplishment—and demonstrated knowledge. (LEGO kens the Kit; LEGO IS the Kit!) Behold: I build the Thing (and construct my Thinking…)

Kits made way for completed products that emerged from MakerBot boxes plug-and-play. (Well, there was still great scope for playing your way to a 3DP-education because—post-plugging—you still had to figure it out…)

Then—for a brief and shiny moment in 2013—MakerBot kitted out a bigger concept. The MakerBot Foundation. A concerted effort to construct an integrated community solution in a non-profit structure. “MakerBotting” was institutionalized in verb form. The graft didn’t take. Pax (pox?) the Foundation and fail forward. Richard Tyson and his Merry Curriculators exited…

In October 2013, MakerBot loaned some of its cachet to another institutionalized—on a Federal level—training effort to foster social-scaled accelerated-learning solutions: America Makes. One of the best things AM did in its first year was to rebrand itself “America Makes.” (Who could forget that tripping mnemonic NAMII? Or, “The National Additive Manufacturing Innovation Institute!”)

When President Obama touted NAMII in his State of the Union Address in January of 2013 he was touting 3DP as tech-wonder industrial policy. (It’s certain very few members of Congress in the President’s audience that evening could even spell “3DP.”) As AM rolls out more of its Centers around the country, we’ll have to see how America Makes version of “Re-Industrialization Via 3DP” progresses…

MakerBot continues its to grow its brick-and-mortar, schooling-house network, the MakerBot Stores. In its innovative Stores, Apple masterfully taught retail how to profit big-time from the Educational Experiential Destination. Don’t think about buying something, just come and play. And learn. How cool Apple’s products are… In the Apple Store, delight is on offer. AND, you just might want to take some of that delight home with you… MakerBot—in its Stores’ strategy—seems to be following the Steve Jobs script. “Let’s just scan you for a 3D portrait…”

Perhaps inspired by its American Makes experience, MakerBot debuted its MakerBot Academy in November of 2013. A MakerBot printer in every school in America. (Yowza: Bre has never lacked for inclusive and expansive vision!)

If the Academy wasn’t enough (or, perhaps because it was too much?), last week MakerBot rolled out the MakerBot Innovation Center system. This is another on-the-ground initiative to partner with educators. This time with Higher Education Institutions around MakerBot 3DP-product outfitted labs. (Oh, and don’t forget the Centers are also targeted at business in general: hey, when swallowing the cow, don’t gag on the tail…) The maker space as degree-granting and certificate-providing classroom.

Without doubt, 3D Printing will really rocket into the American consciousness when Jill and Johnny exit academe with a BA in 3DP. (See the Certificate Program now available from SUNY New Paltz.) Ahead of the DigiFab curve, MakerBot is there NOW with the structured means AND the (MakerBot-branded!) equipment to help 3DP-educate hands-on.

Bre Pettis & Company are demonstrating what I consider to be an unbeatable business strategy. That is Marketing-By-Education. (Here again Apple led the way with its early and invasive positioning in the classroom.) Now, MakerBot’s goal must be to stay ahead of the competition. (Avi Reichental of 3D Systems will want Cubify products in every classroom, too: bet on it…)

How quickly can Bre implement his winning Teach-&-They-Will-Come strategy—the MakerBot Academy and the MakerBot Innovation Center—with in-the-marketplace tactics to match his vision?!

4 Responses to The Edifying Enterprise: How MakerBot Promotes Its Offerings & Differentiates Its Brand Via Marketing-By-Education & Delight-By-DIY/DIT-Mastery