[I published this "3DP As Disruptor" post on 15 March of this year on my LandGrant.co site. (That was three months before establishing NYC3DP.com.)  I'm repeating this post here because---besides commenting on Industrial Disruption---I've identified a number of key, online, 3DP resources (with presented links in this post) you should know AND use.  ---LG]

As The Internet Is Now To Media, 3D Printing Will Be To Manufacturing

If you are in the business of making things, you must now consider what impact 3D Printing (aka Additive Manufacturing) will have on your enterprise.

Furthermore, you should consider that impact SOON. The revolution that 3DP is beginning to drive will disrupt the obvious players…and the not so obvious ones. Regardless of your industrial category, you need to be ready. The effect of 3DP—on you and everyone else—will accelerate quickly.

No commercial industrial entity–no business that produces and/or sells things–will be safe from this commercial revolution. Regardless of how cleverly positioned, well established or profitable your company is, Mr. or Ms. Small Business Owner, you need to consider–carefully–how 3DP will affect your enterprise. Either directly or indirectly—because 3DP WILL do so…

Now, 3DP is exploding as a new commercial change-vector—with profound business implications for EVERY organization…large or small. Retail or industrial.

Rapidly evolving 3DP has already created a “maker” economy. (E.g., Shapeways has 10,000+ clients selling their own 3DP’d objects from individual “Shops” associated with the Shapeways’ online Community.) Personalized fabrication is beginning to change small-scale manufacturing with customized runs-of-one. And, it will do the same for retail businesses—directly (in-house goods creation) or indirectly (business relationships with many more local vendors of customer-bespoke or marketplace super-niched goods).

Besides the enhancement of small-business commercial success, my 3DP Empowerment goals include community economic development. (I see this as DIY empowerment from the bottom up, NOT government or non-profit-funded development from the top down.) Small-biz success most often leads to hiring. I agree with NYC mayoral candidate Adolfo Carrion, Jr. when he says:

“We are a city of small businesses; 75% of new jobs are created by small business. And we understand that the best social program is a job.”

Given my slightly wider view, let me riff a little on Mr. Carrion’s statement with this: The best DIY empowerment is founding a startup; the next best is creating a job for yourself — through your manifest solution-making — in an existing business. Makers have the opportunity to do either one…and more.

This opportunity-grasping leads to wealth building and wealth retention in our local communities. AND, a virtuous upward spiral of civic betterment: our commonweal furthered.

The Revolution will not be televised…it will be a You Tube how-to about desktop, small-batch product-making meeting the needs of self-identifying, worldwide customers for specialized things via social media-driven eCommerce. Now, you must catch-up with the latest 3DP…so you can make informed decisions about your organization’s opportunities at the Revolution.

Here are some cogent links–that I’ve identified in my last few weeks of Twitter research and posting–to current knowledge “tools” for your 3DP familiarization, updating and inspiration process:

Shapeways 3D Printing & the Culture of Creativity (a 2 minute video) 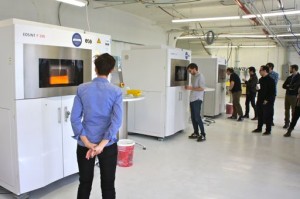 Here are two minutes of joyous and sublime video explication and inspiration: how-tos and why-tos of 3DP! Shapeways is the innovative 3DP service bureau that opened a factory (I like to call it a “foundry”)  in Long Island City, Queens, in October of 2012. Shapeways–now headquartered in Manhattan–has big plans and big VC funding to match. 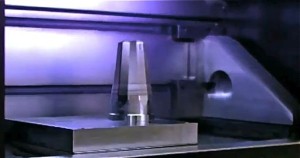 Lisa Harouni is Co-Founder and CEO of Digital Forming, “a software house [in the U.K.] that aims to democratize design for 3D printing technologies.” She spoke on 3DP’ing in November of 2011 at a TEDsalon event in London. The tech is now slightly dated—18 months is a generation in ICT equipment (Information & Communication Technology). Note, however, that the laser-sintering printer is an EOS machine similar to those used by Shapeways in LIC today. The implications Ms. Harouni draws from 3DP tech are still cutting-edge—AND disruptive.

3D Printing Is Even Easier with MakerBot and Autodesk Partnership 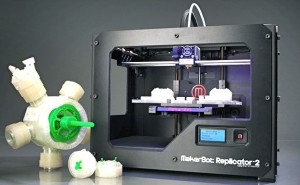 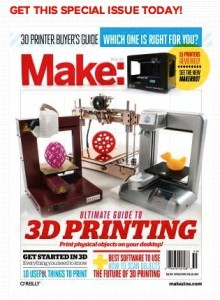 O’Reilly Media–established by Tim O’Reilly, computer and tech media guru, in 1978 (hey, the Apple II was intro’d in 1977)–helps propagate ICT innovations through tech books, magazines, ebooks, videos, conferences, special events, expo exhibiting, equipment sales, accessories supply, tool offerings and online services. Through its various media vehicles–including special publications like this “Buyer’s Guide”–O’Reilly, early on, had “seen the future” of Additive Manufacturing and worked to legitimize the 3DP industry. Personal Fabrication–heavy on the “personal” and DIY–and 3DP are now a major commercial vectors for O’Reilly. See the following O’Reilly entries for major national and local events and a catalog addressing 3DP. The term “Media” in O’Reilly’s corporate title is becoming more of a misnomer–with each 3D Printer sale from its “Maker Shed” online store. 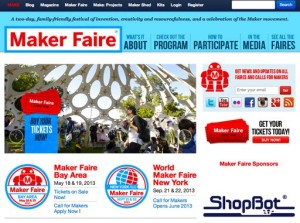 O’Reilly’s 360-degree coverage of the Maker phenom includes festivals called Maker Faires. These include a conference, expo, demonstrations, cyber-flea market and steampunk circus. All these activities are rolled into a single multi-day event that offers a broad-spectrum platform for the diverse interests of Makers. O’Reilly characterizes its Maker Faires as “A two-day, family-friendly festival of invention, creativity and resourcefulness, and a celebration of the Maker movement.” Because of their popularity, the Maker Faire experience is now more widely available via smaller, local events called Mini Maker Faires–the concept and celebration presented on a smaller scale and in smaller cities in the U.S. and around the world. 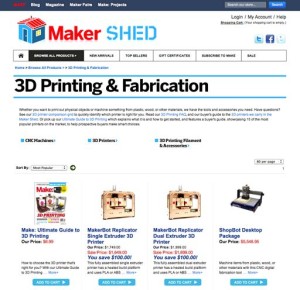 “Maker Shed” is O’Reilly’s 3DP & Fab Catalog for the information and offerings to “make” the user into a personal-fabrication maker. These Maker Shed products include guides, how-tos, comparison grids, FAQs, 3D printers, tools and accessories. In the booming 3DP segment, O’Reilly has moved beyond media–as a popularizer–into manufactured goods–as a player in this new industry. 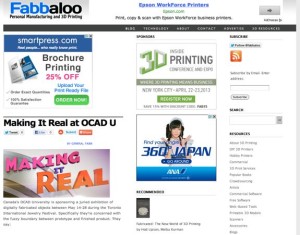 This is a continuing report on all manner of matters in the 3DP segment — written by a Canadian who calls himself “General Fab.” The General delivers rich content and wired-in commentary. Fabbaloo’s site is also VERY useful for its current lists and links to Personal Manufacturing and 3D Printer information and products in the market. Fabbaloo’s fabulous Resource Page includes well-curated and exhaustive sections on: 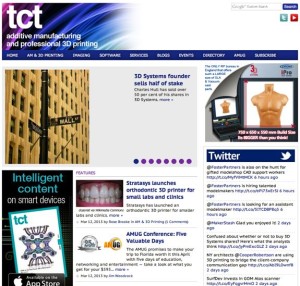 tct (once standing for Time Compression Technologies), of the UK, claims to be the only “communication portfolio” that covers Additive Manufacturing and Industrial 3D Printing in print, online and in-person—globally.

Much of what I’ve presented here are resources that focus on the personal manufacturing (Makers) and DIY 3DP end of this industry’s niche. It all seems so new–especially in its recent acceleration into public consciousness. BUT, “rapid prototyping” tech has been under development and in use for more than 20 years. One publication (now a portfolio of media) that has apparently covered it all is “tct” of the UK. (That tct once stood for “Time Compression Technologies:” yep, rapid prototyping by another name!) This multi-media, single-industry organization STILL prints (physically) a bi-monthly magazine–now augmented by a Web site, exhibition and conference.

Further, tct covers the other end of the spectrum in 3DP–the professional, industrial and enterprise segments. If you’re interested to invest in nascent 3DP technology, tct may be your best resource for investment-value information. (That is, except for commentators and gurus in–and/or covering–the 3DP industry.) 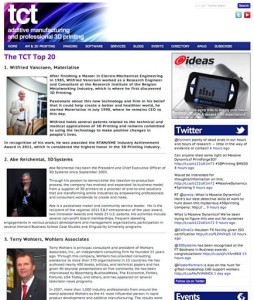 With more than 20 years covering the Additive Manufacturing and Industrial 3D Printing marketplace, tct Magazine has the expertise and gravitas to rank the top 20 players in the industry. This list provides a quick education in which companies and organizations–and, of course, their executives–have the greatest clout and influence in the AM/I3DP industry segment. 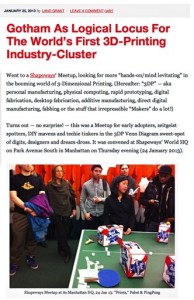 OK: Here’s how my thinking goes…and why I’m high on Additive Manufacturing & 3D Printing. My kind of Tech Empowerment is targeted at the very small businesses and the micro-enterprise in the ultra-urban NYC of individual neighborhoods and communities. These “little local companies” are usually retailers. And, I’d like to see them incorporate appropriate “Bodega-Tech For Mom&Pops” to enhance their success in their hyperlocal marketplace. One of the most important “Bodega-Techs” will certainly be 3DP! This another reason why Gotham’s 195,000 small businesses needs an NYC-located 3DP industrial cluster in the Five Boroughs. 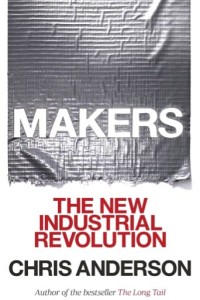 Once You’ve Studied The Resources Above, Read MAKERS and Align Maker History With Your New Maker Future: Success Seeks Synergy!

Finally, as a handbook on 3DP and a broader discussion of its implications for us all, let me recommend the recent book MAKERS. Chris Anderson has hands-on experience in tech-based making. He is the founder of a DIY/hobbyist drone manufacturer—having come up as a hands-on “maker” in that arcane trade (now such hot and contentious subject morally and geo-politically). The new Maker world that Anderson profiles in his book is a Web-driven industry with novel advantages when it comes to job creation and worldwide success. Anderson lists three such advantages to Maker-based businesses: (1) most are open-standards and open-community based (this means they enjoy networked effects from the start, particularly in kick-off marketing via “word of mouth”); (2) most are Web-centric and thus they presume speed, research and resourcing success and the inherent ability to save money; (3) most are instantly globally engaged and worldwide competitive because they are transnational by dint of being born online. Once you’ve perused the resources I’ve presented above, dive into MAKERS to tie it all together. AND, see where 3DP might take you as a new Maker “Preneur!”

This entry was posted in Email, HOME, Video, Views. Bookmark the permalink.