The “How-To” of 3DP Implementation (cont.): Education As THE Engine Of Digi/Fab Advance; OR, Modes Of Thought Transformed To The Tangible…

For Most Just Now, 3DP Is That “Bright & Shiny Thing” Magnetic To The Magpie In Us Humans; 3DP Is New And Novel In Our Commercial And Community Environments; Almost Everyone With Interest Is Going-Up The Learning Curve Of Understanding The Technology… 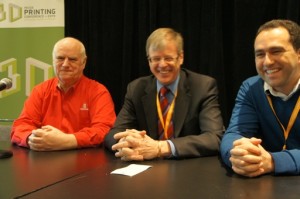 …and we’re often equally positioned in our ignorance. Ironically—as I will explain—that’s probably a good thing at this stage of our Society-wide introduction to 3DP. As William Gibson—noir science-fiction author and cyberpunk prophet said in 1993—”The future is already here. It’s just not very evenly distributed.”

So, fully one-third of those recently polled want a desktop 3D printer in their homes. The other two-thirds may have a hard time spelling “3DP”—let alone conceiving how the technology physically works its Additive-Manufacturing magic.

So, as I stated a few posts ago (on this same topic of the “How-T0″ of 3DP Implementation), 3D Printing and Digital Fabrication education is key to integrating this new—and VERY powerful—technology into both our commerce and our common-good.

Technological newness levels the playing field. The haves and the have-nots play fairly for a time—as the 1 over 99 asymmetry has not yet distorted the rules and paid off the refs and bribed the best players.

No institutions or organizations have managed to entrench 3DP “credential-ism.” There’s no 3DP Ph.D on offer just now. No band of proprietary professionals or trade association have yet formulated a governing regimen. Further, little or no regulation or public policy has been put in place to guide (or constrain) early players.

Thus—beyond those imposed by IP protections—there are no current barriers to entry into our 3DP wonderland. Education is the engine and the train is leaving the station…

Not to strain this metaphor too far…but you could think about the different “cars” in which you might ride this express to your personal 3DP glory. Here’s how you might journey into our mutual future—via venues and/or modes—as headlined by bullet-point:

Each of these headlines entitles an education strategy for your—or your local communities—”How-To” of 3DP implementation. I’m going to flesh-out each of these modes in my next post(s) on this particular part of our high-balling Education Express to 3DP fulfillment…

AND—as I said at the start of this post—many of us are equally positioned in our ignorance of 3DP. THIS is a good thing. Unlike the rest of our Asymmetric Society and our 1/99 Disequilibrium, 3DP is new to most of our fellow citizens (and potentially renewable Middle Class). Thus, a very-large percentage of our population will have a (refreshingly!) equal opportunity to leverage 3DP for new jobs, new businesses and new economic development.