World Maker Faire New York 2014 Is Coming Back To Town: City Makers Turn Out For “Town Hall” In Prep

The folks at Maker Media, Inc. (MM of Sebastopol, CA) are as “hands-on” as their eTinker, 3DPer and DigiFabber constituents in the Maker Movement. (I think MM should get the lion’s share of the credit for—if not founding, exactly—helping to coalesce, support and nurture this dynamic community worldwide.) The MM Team goes to where the action is to make (good) things happen…hands-on! 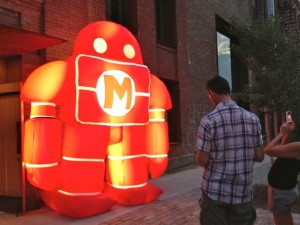 Approximately 30% to 35% of all MM’s Maker Faire activity is directly related to 3D printing. So, as the Maker Movement grows—at a furious pace, as measured by the MM’s booming Maker Faire business (see below)—“Makerism” and its Digital Fabrication base is likely to be a major driver of 3DP education and popularization.

As a kind of hybrid commercial/common-good organization (but very-much a business), Maker Media addresses Maker-centric issues of all kinds across what is now a rich ecosystem. MM is focused on delivering the Maker message, “toolkit” and ethos as widely as possible. Maker Media accomplishes its mission via media publishing (MAKE Magazine), event production (Maker Faires), online merchandizing (Maker Shed) and player-coalescing (Makezine.com, the Making in Education programs and more) at multiple levels.

In truth, World Maker Faire New York has—in the five years since its debut—now become “New York Maker Week.” In 2013, “Mayor Mike” Bloomberg proclaimed “Maker Week” (a la “Fashion Week”) and MM & “Partners” (local and otherwise) managed to put on—or contribute to—10 major ancillary events in the week before World Maker Faire itself. These ranged from the “Hardware Innovation Workshop” to “Education Day” to the “Make a Makerspace Workshop.”

For last week’s Town Hall, MM put out the call to its faithful: local Makers, educators, collaborators, partners, exhibitors, non-profits, public/private partnerships and government supporters. Maker Media gathered them all in—at the new HQ and home of Kickstarter, NYC’s innovative startup-crowdsourcer—in far north Williamsburg. (Kickstarter holds the undisputed title as the driver of more desktop 3D printer development than any other organization in the world…perhaps KS should create a special division and call it “3DPStarter.”) 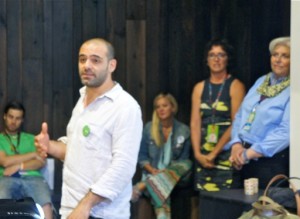 These Faires took place in organizational locations (hey—just in the last six weeks or so—The White House Maker Faire, Maimonides Medical Center MiniMaker Faire for Nurse Makers in Brooklyn, and others), towns, cities and major metro-areas worldwide in 2013. Ms. Huss further remarked that “over 530,000 people experienced those [100] Faires.” Sherry also stated that the largest Maker Faire growth last year was in Europe—reconfirming the international nature of the Maker Movement. 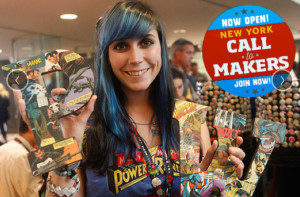 I suspect that the 37% growth (2013 over 2012) of the Maker Faires’ aggregate “gate” encouraged Maker Media to proclaim 2014 “The Year of the Maker.” Sherry Huss told the Town Hall audience that this tagline—and emphasis—would be used at World Maker Faire, too. Buttressing this natural Maker constituency spotlighting, Sherry and MM have also said the following: “The Maker Movement has reached new heights over the last year, impacting the way people are learning, creating, sharing, and collaborating on hobby projects, new inventions, and product enhancements. [In 2014, we] will showcase this electric enthusiasm for making and bring together the community that exemplifies the maker spirit.”

Here are the highlights of the rest of Thursday night’s Town Hall, garnered from MM staff presentations, comments by showcased partners, the revelatory Q&A, my individual discussions with Maker Media Team members in breakout sessions and my exchanges in the hospitality-driven meeting-epilog:

You know, I’ve attended all four of the previous World Maker Faires here in the City. But, until I joined-in the MM Town Hall at Kickstarter in Williamsburg last week—and then researched deep into the Maker Faire phenomenon to write this article—I never really understood how rich the Maker Faire ecosystem is. Maker Media Inc.—according to Sherry Huss—is an organization with only around 50 employees. Yet, MM has figured out how to empower a universe in the Maker Movement via its Maker Faires and its interlocking Maker Media offerings. Kudos!