3DP Unlimited—a provocative corporate title for a large-format printer company—shows you what its new 3DP1000 can do (“1000″ in the printer model-name stands for its 1,000 millimeter square build-plate)

Last week, I went looking for the next “step up” in 3D printers. I found the new 3DP1000—from 3DP Unlimited (formed only in January of this year but with 2 years of R, D & D run-up under the wing of its parent company PBC Linear)—operating on a tradeshow floor in New York City.

Here was a large-format printer with a hyper-capacious build-volume AND precision output—for a cost-effective price. The 3DP1000 is a recently released, industrial-grade, marketplace-entry 3D printer designed to leapfrog what—until now—has been prosumer-style, desktop 3DPs writ large.

Too large—really—to sustain the kind of 3D-printer quality output that industrial manufacturers have been demanding more and more from large-format machines. As the 3DP Unlimited tagline teases: “Why ‘Play Around’ with Ordinary 3D Printers?”

Having seen the 3DP1000 in action—and interviewed its creators—I’m now convinced that quality is the new black in 3DPs. AND, bigger quality bests smaller every time…

Germane to these comments and the breakneck evolution of 3DP products, ponder this. Have you ever wondered why—or, for skeptics, if!—the United States is still the premier industrial power in the world? I invite you walk the crowded aisles of an American, all-in-one, multi-sector, manufacturing-focused trade event—like the one running last week at the Javits Convention Center here in New York City.

This “multi-show”—taking up almost all of the Javits—doesn’t have a single title. (I’d call that a failure of branding by the producer/managers, UBM Canon Events…) It’s nonetheless touted as “The East Coast’s Most Comprehensive Event for Design, Manufacturing, Automation and Packaging.” (Doesn’t exactly trip off the tongue…) Here are the names of the six shows that are sub-components of this umbrella event: MedTechWorld/MD&D; Pack East; Atlantic Design & Manufacturing; Automation Technology Expo (ATX) East; PlasTec East and Pharmapack North America.

Of the upwards of 1,100 exhibitors, fewer than 10 were directly 3DP-related. 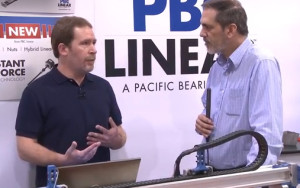 According to Mark Huebner, Market Development Manager of PBC Linear (the parent of 3DP Unlimited), we are “one of the newer companies in the space…and, yes, it’s the Wild West out there [in the 3D printing marketplace]. What sets it [the 3DP1000] apart is the build area. We’ve a meter by meter by ½ meter high usable print area.” The product’s model name—3DP1000—refers to the “1000 millimeter” X- and Y-axes.

Mark continued, “PBC Linear…makes industrial-strength linear actuators…long, straight screw-driven actuators… In their design process [for the 3DP1000], they [our engineers] looked at a number of desktop printers and couldn’t see how they could get the job done [for a large-format 3DP using that typical desktop technology]…We looked at all the desk top printers out there and decided to build our own…[our engineers] went at it with the industrial-strength stuff!”

Joseph Binka, Development Engineer for 3DP Unlimited, joined in with “We use all lead screw drive systems. Most 3D printers today are a combination of belt drives and lead screws. Working with PBC Linear [and their industrial savvy expertise], we were able to use 25 mm-pitch lead screws and use NEMA 23 [stepper] motors, allowing us to really put our 3D printer on steroids. Really beefed it up. So, now, we get really great accuracy and print resolution [down to a layer resolution of 70 microns] and also get good print speeds…”

Industrial-quality components and actuators—like all lead-screw drivers and integrated stepper motor/amplifiers—deliver higher precision and repeatability. This opens up new capabilities and functionalities that more than pay back the higher cost of this large-format 3D printer.

With a large build-plate AND precision, 3DP1000 users can take advantage of the flexibility presented by the meter-square—yet precise—build capability. Not just to create very large objects, but to pump-out multiple objects in one printing session.

So, what are some of the downsides? The basic printer is 300 pounds, the size is significantly larger than its meter-square build area and the print times for large objects can be in the tens of hours.

Mark Huebner continued with “How high can we go [with print resolution]? Here it’s a trade off [with speed]. We want to get as much plastic on the table as possi-ble. We’re working not only with .5 and .4 nozzles, we’re also working with 1 mm nozzles…we tailor that nozzle size to what clients want to do [and at what speed].”

“Everyone that I talk to seems to have a different end-use for the printer. Naval architecture, [regular] architecture, automotive, sculpture, special effects, props and set design in Hollywood. Art is one of the customer drivers… And, we’re also seeing a lot of engineering use. [Our printer] really expands the spectrum of use.” 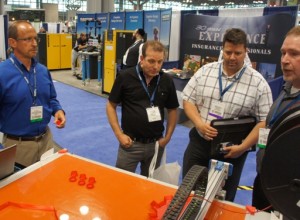 Joe Binka picked up with “We’re seeing a lot of [engineering] customers who want to use the printer in [end-use] manufacturing.”

When quizzed on pricing, Joe stated that the “base platform…starts at $16,000. It really fits that niche. A lot of desktop printer [manufacturers] are trying to drive it down, drive it down, on price. Or, you go very high-end. There you see six-figure machines… Then, [with our price points], an engineer can print something real world.”

3DP Unlimited also tries to maintain affordable flexibility of the 3DP1000 printer by integrating open-source solutions with software and control platforms. According to Binka and Huebner—card-carrying members of the Maker Movement—open-source control solutions offer the customer more flexibility. And, will continue to be an integral part of the strategic positioning of the company going forward.

When I queried my hosts Huebner and Binka at the 3DP Unlimited booth about competition, Mark Huebner replied, “At this size [and price], we don’t see much competition.” (Hmm. How long might that last…?)

The next steps? Multiple heads: extruding and finishing. One-stop prototype machine as an evolving platform. Per Mark, “Customer buys this and wants to put a laser on it—or a CNC head—we want to help them to do that, helping us, too.”

And, one year from now? Mark Huebner: “Plug-and-play prototyping printer. Go on the Web site and order up your choice of solutions…”

When can I get one? “In production now. Typical lead times are four to six weeks.”