Incredibly Innovative Healthcare Solutions—At Every Level—Are The Fastest Growing Segment In Our 3DP Revolution: The Broad  Spectrum Of Human-Health Players In New York City Are Now Organizing To Align And Advance With Accelerating 3DP Change… 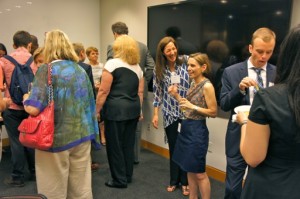 Healthcare is one of America’s most conservative businesses. Yes, practicing at the doctor level can present life-or-death circumstances…literally. So, it’s hard to fault healthcare (HC) practitioners for their inherent prudence in the interests of patients.

Sadly, the conservative mentality that protects patients also tends to penalize HC-industry players—of all stripes—in advancing their broader commercial and common-good interests. (And, yes, the once “august profession” of doctor-driven medicine is now a profit-making enterprise—like any other—regardless of the individual practitioner’s moral, ethical and “unbusiness-like” approach to human healthcare.)

In the U.S., the furtherance of HC business is coupled with the furtherance of HC science. In America’s hyper-capitalist society, it’s hard not to co-align the two. Still, the HC industry today is seeking the most effective balance of (often conflicting) interests. In fact—for the rapid betterment of American healthcare delivery (better results at a lower cost)—it may be essential to assure that we integrate HC business and science as closely as possible.

The sought-after result is an improved “art” of HC for more Americans. (Measured against all industrialized countries, the cost of U.S. HC is far-and-away the highest—while delivering results that are mediocre…or worse.) For our larger society’s benefit, HC—the enterprise—now has a great opportunity to deliver the greater art of human health.

Many of the most startling—and far-reaching—innovations in healthcare are emerging from the 3D printing (3DP) segment.

HOWEVER—to do so—we circle back to the problem of inherent conservatism in the HC industry. Prudence rarely empowers profitable market penetrations.

Conservative norms in HC are endemic to the system. Caution (“First, do no harm…” –Hippocrates.) has been part of medicine since the Ancient Greeks. It persists whether in training (universities), practitioner ethos (doctors and nurses), major HC institutions (hospitals), supplier systems (Big Pharma), government regulation (FDA), the HC ecosystem (credentialism and gatekeeping)— AND even among patients…

Commentators today find many Americans to be more and more risk averse—especially when it comes to the (bitter? tainted??) fruits delivered by big institutions and commercial ecosystems in U.S. society. (Hmm: think Big Food and diet-generated chronic disease: one of the biggest problems in HC. “Processed food” is an oxymoron—but it’s immensely profitable AND often ultimately toxic.)

Now, New York City is—by dint of its liberal approach to matters social, educational, institutional and technological—a locus for potential change in HC worldwide. The City’s HC industry is one of its largest by commercial impact—and, by headcount in the HC ecosystem, likely its largest employer.

New York City is also the world’s epicenter for 3DP. We count among our 3DP players the planet’s commercial leaders in desktop 3D printers (MakerBot of Brooklyn) and 3DP service bureaus (Shapeways of Manhattan and Queens). We also have one of the first “colony’s” of a new human hybrid.

This is the Techreative. Consider the NeoBrooklyn commercial “hipster”—tech-savvy while art-enthused and infused. Able to mate left and right brain sensibilities to create startups from the Bits2Atoms of 3DP: Thought Into Things!

NYC is so 3DP-endowed that it is currently—willy nilly—pulling together the critical mass to create an industrial-segment “cluster” for 3DP. Such a cluster achieved would form THE first (and most important?!) such center in the world. A NYC-based commercial 3DP-cluster “HQ” would join other planet-dominant agglomerations in the City. This includes world-influencing clusters around Finance, Media, Fashion, Art—and a half dozen other business ecosystems in the Five Boroughs.

To help solve the problems—and grasp the opportunities—of HC for New York and the wider world, our HC players need to commercially amalgamate their various and variegated interests. An interconnected and interest-integrated NYC HC community would empower the kind of action that the City has engendered for other industries that have prospered here.

Voila! An Affiliation Group. AND, we’ve got one…!

The NYCHBL membership is made-up principally of C-Suite executives among the major City HC players—broadly defined. “Broadly defined” is one of the mandates of such an organization. The fostered conversation is ecumenical, horizontal and outside the box(es)—that is NYCHBL’s fully realized intent.

In the organization’s words, the NYCHBL mission is “to increase the visibility of New York as a thriving center of healthcare innovation and excellence. Through our legendary events, extensive network and other public activities, we provide a platform for the health community to communicate its immense value.

“We are the premier network of [New York City] healthcare leaders, innovators, executives, professionals and entrepreneurs.

“Our events bring together leaders in the field to discuss the most critical issues facing the industry. They inspire cross-pollination of ideas and solutions, with a focus on high-level, timely and thought-provoking discussion.

“We don’t believe in silos. Our network brings together leaders, executives  and influencers from across the healthcare ecosystem.”

About three months ago, NYCBHL demonstrated its prescience—in looking over the horizon for the Next Big (Tech) Thing in HC—by investigating the possible creation of a first-of-its-kind 3DP/HC event for the NYC health community.

Here’s how NYCBHL President and Co-Founder Bunny Ellerin sees the new nexus of 3DP and HC. “The dawn of 3D printing in healthcare reminds me of the beginning of eHealth in the late 90’s. The excitement, the possibilities to transform medicine, the energy. What is particularly interesting with 3DP is the ability for one doctor to create a solution that completely changes the outcome for a patient. It pushes forward personalized medicine in a way that we have not seen before.”

I was pleased to be called on to help NYCBHL plan and organize the event—and to participate on the panel.

Joining me on the panel proper were:

Zack Schildhorn, Panelist (VP of Lux Capital, where he has invested as a VC in 3DP companies such as Shapeways and Sols Systems);

John Meckler, Panelist (Co-Portfolio Manager, 3D Printing and Technology Fund and an executive in Mediabistro, the event developer/manager of the “Inside 3D Printing” worldwide series of 3DP trade events).

My contribution included a slide deck presenting an introduction and overview of 3DP—and some of the industry’s current and most-exciting innovations in HC.

I was delighted to learn by listening to my colleagues on the dais, exploring the provocative questions of Joel in moderation and joining in the incisive Q&A exchanges with the expert NYCHBL audience. My take-away confirmed in my mind the newness, speed of development and uncertainty around 3DP’s impact on HC.

Since the NYCBHL event, I’ve continued to coalesce my own ideas around some of the issues that the group of us presenters addressed. Here are what I started calling—on the dais— the “Wild Cards” in 3DP/HC technological near-term. I see four such “Wild Cards” and they are:

The foment and ferment in 3DP/HC innovation on university campuses is already changing the time-lines for progress…and, as a result, those time-lines are only getting shorter and shorter while the breakthroughs are becoming more and more startling.

To date, the 3DP revolution has been driven by only a handful of pure-players in 3DP, most of whom have had the new field to themselves; now, however, four major mega-digital companies have taken notice of the obvious HC market opportunities; these digi-disruptors are Apple, Google, HP & Amazon (introducing its OWN smartphone 18 June); expect them to target the 3DP marketplace.

Two Federal government regulatory initiatives will have immediate impact on the success of 3DP/HC products in the marketplace. First is the FDA (Federal Drug Administration) for all the safety issues inherent in 3DP/HC usage, partcuilarly invasive implementations. Second is intellectual property disputes around potential employment of new products based on expiring 3DP patents and the protection of “invented” objects in the reuse marketplace.

Finally, several other major systemic innovations will impact 3DP/HC; these are the extremely powerful commercial forces that will be unleashed in the marketplace by the mash-up of Big Data, Cloud Computing and the Internet of Things; all of these forces will intersect at the 3DP/HC epicenter—because that’s where the money will be.

As you can see, the prospects for 3DP/HC are large, uncertain AND yet coming very quickly. This space will continue to be the fastest growing sector in the 3DP segment. A lot of players are “going to get well” in this burgeoning 3DP/HC marketplace…