[Past is Prologue...And Now We Know Much of the First Few Chapters of the Book of NeoBrooklyn; here's my post from 8 April 2010: three and a half years in 3DP is two generations and change...a lot of change...] 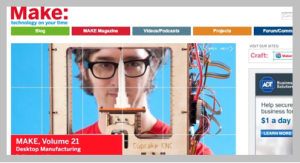 Brooklyn’s Ur DIY Nanofacturer Bre Pettis on the cover of Make magazine with his MakerBot 3D-printer kit.

Perhaps the story of making things in Brooklyn has come full circle: from kitchen table (18th C.) to kitchen table (21st C.). With the Industrial Revolution in-between. The first iteration might have used a few one-off hand tools. The second will surely use ICT to empower the hand/brain of the neo-maker…

OK. Stop me before I neologe again! Nanofacturing is my neologism (“new word:” hey, our world of the new needs fresh words to describe all our proliferating tech-driven novelty, no!) for DIY manufacturing in a garage. Or—in NeoBrooklyn’s case—desktop manufacturing on a kitchen table.

((OK. OK. I’m a pace too slow this time: Nanofacturing.com, the domain name, is taken! An irrefutable indicator that I’ve been beaten to it…tip of the hat to ESH Sciences Inc. Funny enough, they’re actually involved in nanotechnology—really, really small things—NOT “nanofacturing” as I define it.))

The Tech Imp slyly suggests it’s possible to nanofacture successfully in New Brooklyn. (Tech Imp? The Technological Imperative: all things digital are lighter, faster, smaller, cheaper and better over time. I explain this trope of mine so often, I may have to enshrine it in the footer of this site.)

In February [2010], Chris Anderson, Editor in Chief of WIRED magazine (proclaimed “Magazine of the Decade” by AdWeek), delivered another of his cover articles that metamorphs into a meme…and then into the raison d’être of start-ups. This cover story was entitled “The New Industrial Revolution.” The cover page sub-title said it all: “The factory, the investors, the workers—obsolete. In the age of DIY manufacturing, all you need is a garage and a great idea.”

I know you’re guffawing at the Tech Imp here. But, she gets the last laugh. The NYTimes has published an article entitled “Geeks on a Train.”  This story tells how Brooklyn’s own DIY legend and Nanofacturing guru, Bre Pettis—of Borough manufacturing-robotMakerBot—actually produced an immediately useable tool on a tabletop of a moving Amtrak dining car.

“It would be very cool, Bre Pettis decided, to take his desktop manufacturing robot, his MakerBot, out of its big black case and plug it in right there in the Amtrak dining car. It would be, like, ’bots on a train.”

Whereupon, Pettis & Chums rapidly desktop-manufactured—from digits and their 3-D printer—an ABS-plastic bottle opener. With which the assembled trio of witness/techno-mechanics cracked three beers. Presumably toasting their triumph of ‘bots on a train.

Rapid prototyping—or even final production like this—used to be a VERY expensive proposition…only for the Big Guys. Now, Bre Pettis will sell you his MakerBot as a kit starting at $750. The Big Guys are in big trouble.

Now, if you’re a product-centric entrepreneur at your Borough kitchen table, you enjoy low-cost options with which to actually create and prototype your inventive—and NOW commercializable—brainstorms. Next, if you want full production runs, you can turn to China’s Alibaba (first forgetting the incongruous mashup of cultural confusions).

(Yes, I know: exporting manufacturing again! AND, to China!! But, so far, America has NOT managed to coalesce a similar community of flexible, low-cost production companies accessed via a digital-gateway “impresario” firm…yet another opportunity for NeoBrooklyn!)

Alibaba—based on a democratization of the Benetton flexible outsourcing model—is now a major, major player. The third largest firm on China’s national stock exchange. In the Manufacturing Middle Kingdom, Alibaba has identified, aggregated and trained Chinese factories to respond to short-run needs of American innovators. And, everything is communicated via auto-translating Instant Messaging—“Open, Sesame!” Talk about transposing banal tech usage into sublime business…

Here’s another model we need for the manufacturing inventor/innovators of Nanofacturing NeoBrooklyn: TechShop. TechShop is a nascent chain of high-tech/high-end tools, fixtures and systems in a high-support/high interaction workspace. Think the DIY picture-framing shop idea co-opted by digital hackers and numerical-controller geeks who like to mill, lathe and laser high-tech materials to realize high-tech concepts. Making things in a digital shop of this kind is another form of start-up prep.

Further, the “maker movement”—see “Make” magazine: “technology on your time”—is likely to spawn entrepreneurs who’ve cut their teeth in hobbyist mode and want to sink their commercial fangs into the meat of tech-based business creation.

Dear Readers, NeoBrooklyn CAN become a center of Nanofacturing! We have the creativity, the technology, the geekster mentality and the sheer affrontery to pull it off. AND, think of the jobs that homegrown high-growth start-ups can create! So fecund of NeoBrooklyn betterment…

[Written and posted 8 April 2010 on his GrowthRoots.com blog.]

This entry was posted in Email, HOME, Views. Bookmark the permalink.