One of the advantages of living and reporting in New York City (well, to be a Borough chauvinist, Brooklyn, actually!) is that—sooner or later—the world comes to you. Often in the form of a trade show. About 800 such trade events (large and small) offer up curated slices of the globe and its culture in this City every year. Throw in the 56 million visitors to NYC projected in 2014 and—yes—it does feel as though the world has come to call…bringing its kit-bag with it.

OK. I’m interested in “kit-bags” because what’s in them is now—more and more—produced with the help of a 3D printer. So, what I might call “kit-bag swag”—and trade shows about that stuff—is now on my 3DP beat, too. Well, we keep saying 3DP is going to disrupt everything…and damned if it isn’t true!

This week, the kit-bags on offer were to be found at NY NOW. Whassat? Well, it used to be called the New York International Gift Fair. That at least had a story to tell—even if the show itself had morphed out from underneath the name. Still, “NY NOW” reveals less than “Apocalypse NOW”—although some wags may posit these phrases are synonymous.

So, NY NOW holds it’s a trade show for “Home, Lifestyle, Handmade, [and, wait for it] New!” The promoters present their positioning in yet another way: NY NOW is the “Market for Home + Lifestyle.” (Could we truncate it further to “Home-Style?”)

NY NOW IS big. Here are the stats: “This market presents a total of 400+ product categories and 2,800+ suppliers. More than 38,000 attendees are expected from all 50 U.S. states, and more than 80 countries worldwide.”

Young relatives (full disclosure!)—exhibiting at the show—confirmed my 3DP intuition about NY NOW. They pointed out that fellow exhibitors in their “Accent On Design” section are 3DP’ing their high-design products—either in prototyping or end-use printing. 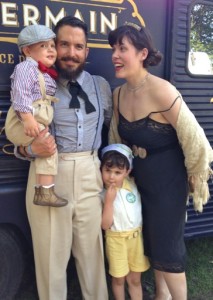 My daughter Thea and son-in-law Nico are partner/co-founders in an Art Jewelry business (Thea Grant) in Brooklyn. They’re about to celebrate their edgy atelier’s tenth anniversary. They offer up jewelry and accessories with the buyer-pleasing virtues of being one-of-a-kind, mostly vintage-sourced, of repurposed materials and made by hand-driven green-crafting. (Say, these terms could also define some of Brooklyn’s compelling ethos!)

Even though Thea has a degree in sculpture and Nico has a master’s in 2D and 3D design, they have remained true to their one-off, hand-built art with repurposed materials. Still—given their skills and market—I wouldn’t be surprised if they eventually begin new lines or brands that incorporate 3D printing. The scope and scale of 3DP-driven creativity is very seductive…especially with nearly 200 materials now in the 3D printable-resources library.

Thea & Nico were exhibiting at NY NOW—for the first time—in a collective/virtual showroom/event-marketing designer platform called American Design Club (AmDC). They were in the good company of 30 other design-driven creators (mostly from “Techreative Brooklyn”) of artisanal objects, lifestyle innovations and “yowza” accessories. (OBTW, yowza is Brooklynese for “a euphemism for any vulgar expression of surprise or sudden pleasure…in a positive sense.” {Urban Dictionary}) 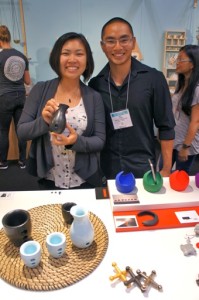 Among the designer/entrepreneurs showing with Thea & Nico at AmDC was a friend of mine from the NYC 3DP Community: Susan Taing of bhold design. Susan’s bhold focuses on clever, witty, utilitarian design of household and personal items—and then transforms those virtues into products via service-bureau and desktop end-use 3D printing. Susan is also a driven marketer and people-person (seem to go together, no?). So, I’m always interested to get her educated views from the marketplace on matters 3DP.

(Hey, Susan—a Shapeways’ “Shopowner”—managed to be dubbed an “Honored Maker” and was showcased in-person as part of the White House Maker Faire in June: now THAT’s marketing!)

As this August NY NOW iteration was not her first, I asked Susan what 3DP trends she was seeing—as revealed by this NY NOW. She stated that—in comparison to the February 2014 show (this giant of an event is semi-annual!)—Summer 2014 presented a three-fold increase in AmDC exhibitors employing 3DP in some fashion. Up from two (bhold was one) to six in just six months.

AmDC participants are mostly young people with young companies. So, they readily cross their inherent tech understanding with their entrepreneurial needs. I posit that these “assets” are two of the reasons why 3DP is growing so rapidly in this community. With design sensibilities and maker inclinations, a desktop 3D printer on the kitchen table (or a service bureau relationship) puts you in business. Or, in business enough to—at the least—test competitiveness in the marketplace with trial (product) balloons. Quickly, easily and cheaply.

Iterating to success is a natural and effective process when you can 3DP-rev your startup’s debut product(s). 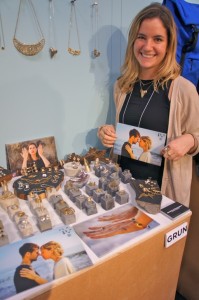 Tanya Gruenberg of Studio Grun—a 3DP-driven jeweler—was another of the AmDC community at NY NOW. Tanya (with a degree in industrial design) has focused on her designs and marketing—and CAD design files—and left the details of actual 3D printing to New York service bureau Shapeways.

Some of Tanya’s pieces take specific advantage of the retro-quality “degradation” that can be obtained with some of Shapeways’ materials and tech. Pitted, pocked, distressed and “aged” metal surfaces impart a certain added allure to her gothic line of rings.

The 3DP-community here in NYC is fluid and susceptible to cross-pollination. For instance, Tanya worked with Shapeways on their team that supported the Museum of Arts & Design (MAD) in its seminal 3DP/Digital Fabrication exhibition—Out of Hand: Materializing the Postdigital. That exhibit closed in April of this year—but not before educating and inspiring a vast audience in 3DP “possibilities” over five months. Including—may I suggest—Tanya and her jewelling art.

Looking further afield in the “Accent On Design” section of NY NOW for 3DP’ing, I also met Alissia Melka-Teichroew, Founder and Creative Director of byAMT, another New York-based exhibitor (this time actually based in Manhattan, NOT Brooklyn). She holds a masters in industrial design from RISD and was exhibiting with the JOIN Design collective—around the corner from AmDC.

Alissia and I talked about two lines of jewelry she has designed and is producing. One is called “Jointed Jewels” and the other is “Quilt Collection.” “Jewels” looks much like VERY sophisticated “pop beads”—in rich colors and deep shades. The “Jewels” are in 3D-printed nylon—and are end-use creations. “Quilt” picks up its shapes and surface from the “Quilt(ed)” metal diamond-patterns on the chrome sides of food trucks. The “Quilt” line is principally cast of yellow brass—from 3D printed investments. A la the ancient lost-wax technique. The Quilt line is also jewelry.

Alissia takes a different view—from, say, Tanya Gruenberg of Studio Grun—of the uses of 3DP in her byAMT jewelry lines. First, she states that she never “3D prints for the sake of 3D printing.”

On further discussion around this point, Alissia expanded “…I don’t find 3D printing interesting when it is just for the sake of…doing it. I find it more interesting…for things that can ONLY be made using 3D printing. Like the Jointed Jewels—that are all printed in ONE [segmented] piece—so the ball joint is “printed inside” the larger bead or part [all at the same time via the magical-seeming Additive Manufacturing process]. I use this technique in both the Quilt Collection and the Jointed Jewels. This is when I think 3D printing has added value…[the same unique 3DP manufacturing capabilities apply] when you need custom parts, [e.g., patient-specific prosthetic appliances in healthcare]…”

Alissa continued “…I [also] use 3D printing for prototyping and to make waxes for casting—actually we make a mold from that [wax] and then we cast… The Quilt Collection consists of Brass, Silver, Wood and Nylon 3D-printed pieces. All are made using a 3D [CAD] file—including the wood pieces—which are CNC’ed [Computer Numeric Control-routed, a Subtractive Manufacturing technique].”

Finally, Etsy—another Brooklyn leader in “making,” innovations in market access and online marketing and sales—had a VERY impressive presence at NY NOW. [BTW, Etsy---headquartered one block from me in DUMBO---will probably be the first $1 billion plus “cash out” home-grown in our booming, New York City, tech ecosystem.] Envision 24 featured Etsy designers in a highly designed and styled environment. (This exhibition environment made me feel like I was enjoying warm chocolate cookies and a glass of cold milk in Grandma’s kitchen — hey, this is a compliment!)

The company’s push was all about Wholesale—and providing Etsy-curated “Shop” access for the retail marketplace. Here’s the company’s pitch in a sentence: “Buy wholesale from over 1,500 Etsy shops on Etsy Wholesale, our private, juried marketplace for professional buyers and designers.”

Looking for more about Etsy and 3DP, I reached out to Dayna Isom, a Public Relations Specialist on the Communications Team at the company.

I explained to Dayna by email that we know that 3DP prototyping has long been employed—mostly under the radar—for physical product development in the NY NOW segments. But, that I was also looking for 3DP innovations and end-use applications—as more and more producers are recognizing that rapidly advancing 3DP tech can also deliver customized, one-off “final” products.

I also stated that I know—in past times—Etsy has discouraged its community’s use of 3DP tech. But, I understand that stance is evolving. I also asked if she would provide me with some feedback in the current “Etsy-ian” attitude — corporately and community-wise — around 3DP.

“While Etsy does not disclose stats on the use of 3D printing, we do embrace all kinds of creativity. Etsy supports our community members who are learning and using new technology innovations and we believe that handmade on Etsy isn’t restricted to just one way of making.

“There are [Etsy] sellers all over the world using technologies like 3D printing and other emerging technologies like laser cutting and CNC routing, including Collected Edition, Printmeneer and Nervous System. We know that new technologies will continue to grow and we want to be sure to keep up with our growing community of makers.

“Here are quotes from a few [of our] sellers using 3D printing:

From Rotterdam, Netherlands, Wouter began to experiment with his 3D printer whimsically — producing unusual cookie cutters (golden ratios, butcher diagrams, custom designs). This side business on Etsy has exploded, and Wouter has had to scale back his day job as an architect to keep up with demand. ‘I wanted to have something that wasn’t available. Now I can offer that to everybody.’

A full-time Atlanta-based designer, Colleen began experimenting with her line of mini planters as jewelry and bike accessories after thinking about how to turn plastic items from temporary throwaways to treasured objects. Colleen turned to 3D printing to produce these adorable pieces of nature, attracted to the low barrier to entry for prototyping, as compared to more traditional methods of manufacturing. ‘There’s still a lot of handwork done, but there is some automation. It’s a nice middle ground, between mass producing and doing it completely by hand.’” 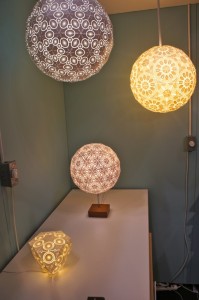 My look into 3DP usage of the commercial community showcased at NY NOW has convince me that the makers of Home & Lifestyle products—a giant sector—are just beginning to “get” 3DP. We’ll have to continue following their (3DP!) progress at future NY NOWs. Promise!