Beauty is in the eye of the beholder. Art is in the brain of the artist. And, now there are new 3D printing-driven tools to transmute and transmit the “art” inherent in—and of—the brain for the eye to behold. As beauty…or not! But, certainly it is the “truth” of one thought now caught…as sculpture… 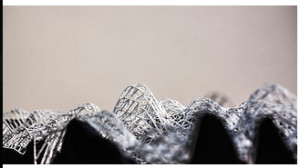 A “Mental Grid” Sculpture by Ion Popian: Thought Caught On The Fly As Synaptic Fabrications…

If novelty is a component of beauty, then this “art” qualifies as beautiful for its sheer originality. The art is also intensely intellectual — both in the creating and in the perceiving — and can be as convoluted as a synaptic map. The 3D-printed “outputs” look like warped, white plastic wireframes or undulating geometric truss systems. They are, in effect, the solidified brainwaves of individuals volunteering to cooperate in this innovative creative process.

Ion Popian — perhaps the first “techno-neuro sculptor” — is an artist in Queens, New York with a day-job as an architect. Mr. Popian has created a collection of 3D artworks for an initial series of 3D-printed works he calls “Mental Fabrications.” Popian’s process of radically new art-making is both highly collaborative and highly technological.

Ion Popian comments, “The process of architecture is what I used to derive this whole concept. It’s trying to bring a scientific…process to an art project.” After intuiting this new creative process, Ion Popian recruited a filmmaker — Noah Shulman — to help make specific “video stimulations” to prep participations for their best brainwave work as “co-artists.” Popian also brought in a programmer — Thomas Martinez — to take head-mounted, biosensor-harvested, brainwave data (via a electroencephalogram, or EEG, pick-up) and convert it to CAD files for 3D printing. Then, of course, he invited brainwave-creating volunteers — Popian’s co-artists.

Could these works of brain-state representation be as unique as fingerprints? Popian thinks so. Could the output of some thought-projecting co-artists come to be considered more beautiful than others? Probably…but the population of brainwave/co-artist participants is still too small to recognize the next Van Gogh of the Synapes. Yet.

Furthermore, Popian — architect by training, don’t forget — intends to scale-up his brainwave art to human-habitation size for a more ambitious project in this summer of 2014. (May I suggest branding the results as “Intellectual I-Beams?”) Perhaps some Popian brainwave co-artists will end up living in their own unique, 3D-printed, techno-neuro sculptures.

Would that constitute the “ghost in the machine” or the “machine in the ghost?”