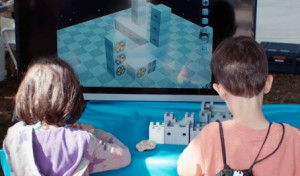 Blokify Empowers 3D Modeling For Kids with iPad Interfaces: a combo of structured finger-painting and Minecraft on iOS touchscreens, even K-5ers can grok this interface… (Pic Thx to Fabbaloo.com at World Maker Faire NYC, 21 September 2013!)

In my last four posts, I’ve considered “Edifying Enterprises,” Marketers-By-Education and Playroom Players. For your broader benefit, I’ve focused my commercial and commentator interest on MakerBot and 3D Systems—and actions and initiatives of those companies in the 3DP Education Marketplace. Commercial leaders’ positioning and directions can inform us of where resources are being invested—and where the market is likely to go.

At the same time, astute observers—and would-be leaders—among the readership here can also profitably look to other trend identifiers. These are the flares and fireworks one observes in the random-noise “night sky”—and wonders at…with commercial and common-good intent. Gather the dazzle and string your own constellations to light your way…

How to engage really-young makers and empower their leap from LEGO to 3D digital modeling—and subsequent “making” of their own LEGO-like constructs on 3D Printers?

Until now, this early-tech-ed-via-3DP was a difficult problem for both parents and pedagogues. Low-end and simple 3D modeling tools—like Autodesk’s 123D Design—are still NOT simple enough for K-5ers. (This segment not big enough for you? Think about the “Double Nickel” crowd: those 55 and older. Untutored K-5ers AND 55ers are in about the same place with regards to digitech education needs (with an edge to the K-5ers!)…other players should “do” SUPER simple CAD software—and serve both market niches at once!)

Here’s another intriguing (would-be 3DP) teacher’s resource I ran across while researching this post. Check out “3D Printing in the Classroom” on the Classroom 2.0 site. The links contained in this blog stretch across K-12.

AND—least I forget—our own NYC3DP Summits September 2013 Roundtable on 3DP Ed Tech is available here. It is really an outstanding and educational discussion among some of the most important players in the NYC Ed Tech scene. “3DP & Kids” was convened on 25 September 2013 at LREI’s Elisabeth Irwin HS in the Village. The entire Roundtable is on video and you can access it from this Vlog interface above. Again: pan K-12 ideas across the 3DP spectrum…

If K-5 is where we train the fingers, eyes and imaginations, then middle school is where we capture the hearts and minds—particularly for STEM and STE(A)M in high school, college and later life. 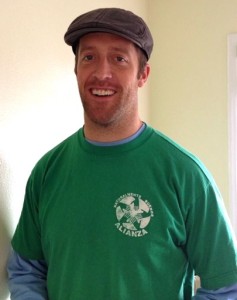 I’ve a son-in-law who teaches math and biology in a district middle school—that he helped to establish—in Oakland, California. Eighty-five percent of his students are recipients of free lunches. In other words, these are very disadvantaged kids. And, then you throw in English as a second language, chaotic home lives and a high percentage of “undocumentation.”

Rowan decided to switch from teaching STEM in high school in Oakland to doing similar work in middle school. This because he really DOES believe that “hearts and minds” are channeled into STEM success in middle school. After that, STEM/STE(A)M-susceptible/smitten kids can be too easily lost to the very many pressures and distractions of high school and the clamor of life thereafter.

Ro changed his own career track because he feels it IS essential to assure that as many kids as possible are exposed to—and seduced by—the arts and beauties of science.

My STEM-inspiring son-i-l presents life possibilities to his many down-side students. The kind of tech-driven fantasies-come-true that his Middle Schoolers see all around the Bay Area—BUT as through a glass darkly—from San Francisco’s SOMA to Silicon Valley to the East Bay and Berkeley. 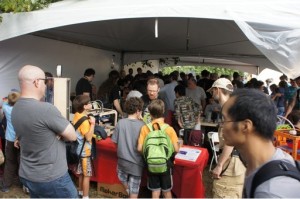 3D Printing is just a machine-driven construct until someone creates something. And, creativity is an exquisite form of problem-solving. Applying knowledge, artistic inquiry and critical thinking to the real world is what 3DP can be all about.

I regularly talk about the inherent advantage that New York City—and especially Brooklyn—has in the 3DP revolution. I’ve even taken to calling our NeoBrooklyn “hybrid hipster” the Techreative. This reflects his or her dual—and synergistic—capabilities in digital technology AND analog art and design. (Coming back to the acronym STE(A)M: Science, Technology, Engineering, Art/Design & Math.)

In 3DP, both technology and creativity add to the mix of 3D-Print “making.”

My son-in-law often employes the curriculum concepts known as Project-Based Learning (PBL). In essence, learning by doing. Don’t learn the abstract precepts first; discover, uncover, develop them as you progress through your PBL “build plan.” A kind of high-tech apprenticeship with lots of hands-on/minds-on manipulation of atoms—as much or more than digits.

PBL is a great teaching structure for successful 3D-printing curricula—it, too, is problem-solving in the round.

So, the curricula ARE key—in succeeding in the 3DP Education Market. And the primary alliances to be made are with the teachers—who first must be taught! That 3DP industry player who 3DP-empowers the teachers will win their mindshare—and allegiance going forward—in the marketplace battle to win commercially via Marketing-By-Education.

PBL is just one structure to transform the 3D Printer into a teaching tool unparalleled. Many educators and entrepreneurs will be focused on creating new and even-more effective curricula to take advantage of the newest Edu-Tech Tool, the 3D Printer.

This entry was posted in Email, HOME, NY3DPWeek, Video, Views. Bookmark the permalink.