How To Triumph In 3DP-Driven Economic Development: When You Witness The Start Of A (Tech) Revolution, Join With The Partisans Of Common-Good. Those Glad-Heart Guerrillas Are Gonna Win…

When Technology (Once Again!) Disrupts Our Commercial Lives, It’s Important To Assure That We Also Put The New (3DP!) “Tech Engine” To Work To Drive Local-Community Economic Development—For The Benefit Of The Commonweal And A Wide Spectrum Of Constituencies… 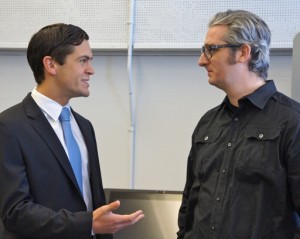 Sean Eldridge, President of Hudson River Ventures & a Founder/Benefactor of the Hudson Valley Advanced Manufacturing Center/HV3D at SUNY New Paltz, exchanges with Bre Pettis, CEO of MakerBot, and key-noter at the the Grand Opening Celebration at the “MakerBot Innovation Center” at SUNY New Paltz, 11 Feb 2014.

How can we assure that 3DP—with all its promised disruption AND creativity—adds to the betterment of our commerce AND common-good? “To Triumph In 3DP-Driven Economic Development”—as this post’s title posits.

Well, I’ve got a perfect paradigm for you to parse. An Epic Win (in game-play parlance)—called the MakerBot Innovation Center. This Win is one that real folks can emulate and make their own—from the bottom up—at their local-community level.

An Epic Win In An Unlikely Place

In February, a small group of hyper-local individuals and organizations in an Upstate New York region celebrated the debut of a first-time-anywhere Economic Development initiative. The tech-engine was revolutionary 3DP and its new epicenter-home in one of their “capital” towns. The local group drove this innovative program successfully via their work as a public/private/pedagogic partnership

And, this debut—of something entirely new—was a commercial AND common-good coup… 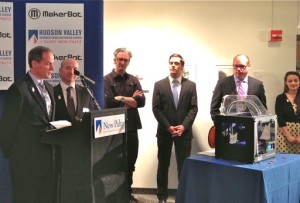 BUT, BUT, BUT the “DemoTechies” Team DID it. They proved to be implementing visionaries. The people who led this 3DP-centric effort, the new-made enthusiasts who engaged and the entire integrated, instigating group. This Team became THE 3DP manifestation of tech-driven, broad-based, local Economic Development at its best.

I was there in person to cover the Innovation Center’s debut event on 11 February. You can read the techie-journo proceeds of my eye-witnessing and first-hand commentary in THREE blog posts (click through the links here in this overview piece). Three back-to-back articles show how important I think this event—and the constellation of special circumstances around it—was.

Important ESPECIALLY to the advancement of local Economic Development!

Should you care to dive deeper—I recommend these as backgrounders to frame the ideas in the rest of this post—please click on these links to my three recent posts on the seminal New Paltz event and MakerBot as “Edifying Enterprise:”

(10 Feb 14) “The Edifying Enterprise: How MakerBot Promotes Its Offerings &…”

The impetus to build these kinds of Teams can come from hyperlocal leadership. Or, a node on a nascent neighborhood, near-at-hand community or regional network. Or, it might be coalesced and/or launched with the help of an outside organization with common-good intent—and a concrete vision and/or proven system on which to model support structures and on-going operations.

In the case of our New Paltz Team, it was a little of each of these…and much more. A new paradigm… 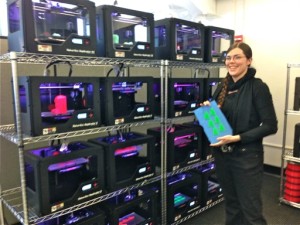 One of several racks of MakerBot 3DP equipment — among 35 plus Replicator 2 3D Printers & Digitizers — with a Graduate Assistant at the MakerBot Innovation Center Opening Ceremony, 11 February 2014, SUNY New Paltz.

We CAN help engender high-levels of commercial AND common-good achievement in local (3DP-driven) tech-enabled Economic Development. The Innovation Center Team created its Epic Win springing from the not-uncommon—but inherently difficult—social, political and economic circumstances in New Paltz and Hudson River Valley. I know it can be done: I’ve been writing about small business “Tech Empowerment” for years (with that phrase as my positioning statement).

Still—even with “Fourth Disruptor” 3DP as the tech impetus or powerful lever—the “Empowering Team” is THE thing.

Now, I think it’s important to coalesce some of these local-ecosystem empowerment ideas into an actually Team building system. To help create what I’m calling 3DP Collaborative Home-Teams. I last commented on this system concept in my 17 February post. BUT—to start—I think a clip from that post would bear repeating here:

The “Collaborative Home-Team” [A Selection From My 17 February Post]:

One solution to this dilemma—of scaling and extending the concept and reality of Innovation Centers out into each local-business community nationwide—is to partner and collaborate with the most-important hyper-local players as a TEAM of community interests.

What I’ve already started to call the Collaborative Home-Team in posts such as these.

In innovative re-industrialization initiatives like this MakerBot Center play, there are natural allies to be recruited and conjoined into an effective local Team. The first-ever MakerBot Innovation Center has proved the concept. That is: such make-it-happen, geography-connected Teams CAN be coalesced into effective engines of common-interest, proactive support and successful change.

These organizations have common and commonweal interests that they can naturally help to aggregate and advance change-agents, entrepreneurs, communities, populations, industries and more. The catalyst can be win/win initiatives like MakerBot Innovation Centers. BUT, the on-driving engine must be—at the least—an engaged and energetic leadership (or a cadre of genuine believers) with vision, resources and drive to help bring such Teams together for both commerce and common-good. 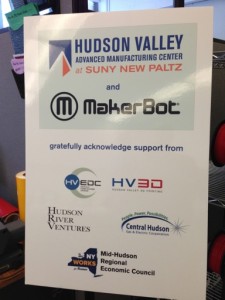 Signage at the MakerBot Innovation Center Opening Ceremony, 11 February 2014, SUNY New Paltz, showing some of the Team of local collaborators who helped realize this break-through project.

With this Collaborative Home-Team perspective in mind, here’s how the New Paltz Team was structured  (from our Home-Team player categories).

As a diagram of visualization and interaction, think of a hexagon with the Hudson Valley Advanced Manufacturing Center/HV3D and the MakerBot Innovation Center co-located at the center of the hexagon.

Each of the six main players of the New Paltz Collaborative Home-Team are “located” at one of the six vertices of our hexagon. In no order of precedence, they are:

The primary effect of this “polygon of success” configuration is that all the players are identified, interconnected and focused on the central objective of the program.

A Year Of Leadership & Hard Work In The Hudson Valley

During 2012 and 2013, the four local Hudson Valley players in this group (all but NY State’s MHREDC and MakerBot) laid the basis for common-interest centering and Team coalescing.

The key energizing idea seems to have been using emerging 3DP to drive local Economic Development.

Mid-2012 was still early in the now (more!) clearly booming 3DP revolution. Still, a group of players (and a group outside a tech hub, to boot) committing to an initiative driven by 3DP. This collective stance required intuition or prescience or an appreciation of what 3DP might accomplish that was truly leading edge, a remarkable outlier positioning.

I believe their Epic Win took a combination of all three of these seer ingredients melded…plus luck…timing…AND the magic substance: Leadership.

I don’t (yet) know all the nuances of this important campaign behind the realization of the Hudson Valley Advanced Manufacturing Center/HV3D and the MakerBot Innovation Center. BUT, I hope to…because this campaign’s ingenuity and resourcefulness needs replication.

The fact is that one (very-effective!) group of mostly local players managed to pull off this 3DP Collaborative Home-Team aggregation and special-campaign advancement. And drove to a (first-ever anywhere) Epic-Win accomplishment with their HV3D/Innovation Center realization.

Emulating An Epic Win: Elements In A Successful Campaign

And, their success means that there is high hope to make this a repeatable process. So, we need to know how it all came together—because other such teams will want to emulate this campaign in the near(est) future. In New York City. In New York State. And, everywhere else in America… 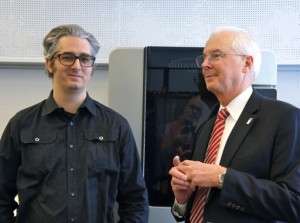 Leadership may be the key ingredient, but there are others of near-equal importance in the course of successful program action.

Early on, leaders and/or organizations need to seed the process with a significant resource contribution(s) to kick off the campaign. This input could be in cash, kind and/or connection-making. (These contributions are also the springboard for recruiting other “sponsors” to join the program—everyone wants the right people to come to the campaign “party,” they don’t want to be there alone and campaign-player aggregation gains momentum with each recruitment success.)  There needs to be a physical center of action and headquarters on-going. It helps mightily if that center is at, or involved with, a Higher Education Institution (HEI). For dissemination of results (e.g., business enhancement, workforce development, new enterprise formation, etc.), an Economic Development Organization (EDO) is also key.

The New Paltz Take-Away: Progress Process As A Pattern For ED Success

So, here’s what you need know about the process of building the SUNY New Paltz HV3D and subsequent Innovation Center in the Economic Development short-form—and who the players were and what they did:

During a more-or-less year of run-up (last half of 2012 and first half of 2013), the core team members (all locals)—SUNY New Paltz, Hudson River Ventures, Hudson Valley EDC & Central Hudson G&E—joined forces as a Team around a 3DP Economic Development-plus-plus play, came up with a game plan and executed it via a number of key actions. Here (not necessarily in this order) are some of their milestones:

Disruptive Opportunity Grasped.  The Team coalesces around the hottest driver in tech, manufacturing and entrepreneurship: 3DP.

Center of Action Formed.  During that year, the Team decided to create the Hudson Valley Advanced Manufacturing Center (branded as HV3D: a name that underlines the 3DP in “Advanced”) at SUNY New Paltz.

Lead HEI Gets In.  Donald Christian, President of SUNY New Paltz, commits his institution to provide the physical venue for HV3D—and the greater goal of a relationship with MakerBot—and various innovative pedagogical goals around 3DP. 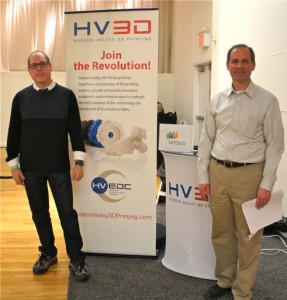 There’s much more to this on-going New Paltz story. And, I’ll be back to share as I continue mining its rich vein. But, what counts right now is this explication of what they have already accomplished—and will going forward. Because their remarkable achievement is indeed an Epic Win—from which we can all learn and profit…

This entry was posted in Email, HOME, How-Tos, NY3DPWeek, Views. Bookmark the permalink.