The New World (Disrupted) Order of 3DP: The Engines Of 3D-Printing Are Iterating As Fast As Rapid-Prototyping On Steroids—Now We Need “How-To”

If We’re At The Apple II Stage of 3DP Development in This Accelerating Revolution, The “Killer App” (Our 3DP VisiCalc) Is Now How-To Implement Successful Commercial And Common-Good Change With All The 3DP Power At Hand… 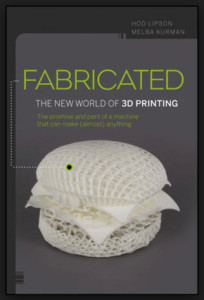 FABRICATED—THE NEW WORLD OF 3D PRINTING
By Hod Lipson & Melba Kurman.         This marvelous overview is the best “3DP 101″ currently available. Even as the tech evolves at lightning speed, the issues and ideas presented here will continue to matter…

As many of you know—who show up here on occasion—as the Founder/Publisher of 3DP Media, I focus exclusively on covering 3DP. With—I own up—a kind of messianic zeal. But, this stuff—this 3DP—IS important. And, we need to figure it out… Before 3DP gains a dark-side reputation—every disruptive tech whispers blow-back—for creating more problems than it solves.

“3DP” is a mashup, a semi-acronym. 3DP—the new “word,” the neologism—combines all the most recent industry segment usages, presents a visual cue and rhymes when said. Most of the signifiers in this business are multi-syllabic and arduous phrases. 3-Dimensional Printing, Additive Manufacturing, Computer Numerical Control, Digital Fabrication. That’s why I’m sure “3DP” will be the natural linguistic evolution—the common street parlance—from the phrase “3D Printing.” This last is now the current “brand” for our industrial sector. BUT, usage will rebrand it 3DP.

3DP is also the 4th Disruptor! In order of timeline debut, these four landmarks of our Digital Age are: (1) PC; (2) Internet; (3) Social Media; (4) 3DP. Disruptors (1) thru (3) are Digital; 3DP is Neo-Analog! I’ve lectured before about our Disruptor Regimen; but it bears repeating. Because, our Fourth Disruptor promises to help re-industrialize and rejuvenate American manufacturing—by (among other make-over vectors) “new-shoring” it IN the United States. AND, that’s before we discuss the entirely novel uses of 3DP in wide-spectrum commerce. It is now possible—with a straight face—to say 3DP will change everything.

In this time of high flux—in this moment of the Fourth Disruptor “launch”—the rules of many business segments are about to change. And, everyone’s  business opportunities are writ as in quicksilver. Whether it’s for personal, fiscal or common-good gain. As are a number of other rules by which we live(d): think social, civic and commercial. OR, think all three at once: what some call Economic Development.

So, how should any of us play—for profit and/or society’s benefit—the New World (Disrupted) Order of 3DP?

First, it helps to remember that Fourth Disruptor 3DP is a complete-make-over technology that is fundamentally different from the first three Disruptors of the last 40 years. Disruptions Numbers One through Three were mostly about digits or bits. (Thought: what you can hold in your head or digital device or Cloud-based system.) Fourth Disruptor 3DP is mostly about atoms. (Things: what you can hold in your hand.)

And, those “thought” proceeds of the first Three Disruptions can be transformed into “thing” proceeds of the Fourth: bits become atoms in a magical roundelay of iterations to quick-time product success. You could call it Magical Manufacturing: Thinking  Things…

(And, many people—just now—have a hard time envisioning how Additive Manufacturing, aka “3D Printing,” works. It does seem magical. Or, as science-fiction savant and seer Arthur C. Clark once opined: “Any sufficiently advanced technology is indistinguishable from magic.”)

Magic or advanced technology, 3DP certainly is—and will continue at an accelerating pace—creating change. And—contrary to the idea of the destruction of commercial disruption—we should consider 3DP change to be the most creativity-making opportunity in our time. Still—as with any empowering engine—this atom-manipulating genii from a digital bottle needs proactive management and intelligent guidance. 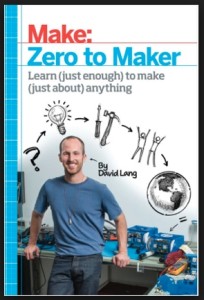 I’m certainly not suggesting that we seek governmental, legal or regulatory protection from 3DP’s creative destruction. No, what we really need is 3DP propagated DIY/DIT (Do-It-Together) at the grassroots. Think: the Maker Ethos on steroids.

And, the level from which 3DP-driven change should arise—most effectively—is from the BOTTOM. As in DIY and DIT, grassroots, local-community bottom-up. If ever there were a technology that could be described as “democratizing,” 3DP is it.  Call it DemosTech. (“Common People Technology”; and—when you’re out soap-boxing—pronounce the “demos” with a long “e.”)

Now, everyone (empowered by Moore’s Law and lapsing IP protections on early 3DP patents) can “do” this Industry on their kitchen table in their eCottage. Voila! eCottage Industry in the 21st Century.

In the last four or five years, another powerful Bottom-Up Driver of this 3DP DemosTech has developed—mostly under the commercial, political and media-coverage radar.

(OBTW, this “last four or five years” is about the lifespan of Brooklyn’s MakerBot: during which time that startup—more or less—spearheaded the creation of the desktop or home 3D Printer market. Yep: bottom up… In fact—ironically—MakerBot used to manufacture in Brooklyn’s Gowanus neighborhood in what they called “BotCaves.” Those structures could have been mistaken for remnants of 19th C. “dark satanic mills” hard by a SuperFund site. Really “bottom…”)

One of the unheralded Bottom-Up DemosTech Drivers is the early (3DP) adopting Maker Movement. The Movement includes makers, crafters, artisans, tinkers, tech/artists, STEM/STE(A)M teachers, eHobbyists, benign hackers, micro-controller geeks, DIY/DITers and more. These are the quintessential “atoms” people—who have used “digits” (the Internet) to find each other, aggregate and form communities in physical Maker Spaces, Places, Fabs, Labs, Studios, Collectives and Workshops. (MakerBot sprang from one of these early—and on-going—”places”: NYC Resistor.)

So, Makers have been among the first to figure out how to monetize 3DP. (At least at the local-community level; a few professional and industrial segments—automotive, aerospace—have been working 3Dp since it was invented 30 years ago.) Maker interest, curiosity and necessity (i.e., lack of capitalistic resources) begat hands-on learning begat hobbies begat playful RD&D begat innovations begat products begat startups—via DIY/DIT and iterations…lots of iterations. Something 3DP does very well.

Now, if 3DP is to accomplish all that I’m talking about here—and we haven’t even touched on the common-good aspects like job generation—we need to get deeper into the “how-to” of this disruption-making/opportunity-presenting phenomenon. How are the new MakerBots-to-be leveraging 3DP? And, how can we propagate these success-techniques across every appropriate industry and business in America?!

With this post, I’m beginning an examination of these aspects of the “how-to” so necessary to the advance—and empowerment—of 3DP.

This entry was posted in Email, HOME, How-Tos, NY3DPWeek, Views. Bookmark the permalink.