NYC3DPer & HCx3DP Bits (Digits) & Pieces (Atoms): Highlights of What Has Happened In The Last Two Weeks AND What IS Happening THIS Week In NYC…

As some of you know, I’ve been employed the last several weeks in prepping for our “HCx3DP Meetups WEEK” (13 through 17 April) Events. Still—while focused on building panels, workshops and roundtables—I’ve managed to collect a number of first-hand reports. I was “there”—in-person or via virtual presence—on compelling and connected news items of interest to You: NYC3DPers and HCx3DP Synergists (“Healthcare Multiplied By 3D Printing”) in our New York City. Here’s a quick review of those items I think will be of most importance to you. (Well, yes, that’s the nature of this blogger’s curation: an informed choice from my specific POV…) 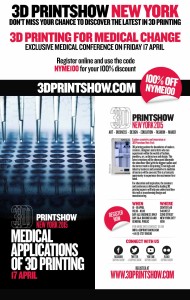 3D Printshow (3DPS) is a London-based, world-wide media company that ran its first “3D Printshow” in New York City in February 2014. This week—16 to 19 April at Center 548 (548 West 22nd Street)—3DPS will roll-out its second annual “3D Printshow New York” event here in Gotham. This Conference & Expo competes directly with our homegrown MecklerMedia’s “Inside 3D Printing New York” (in its third iteration this week—15 to 17 April at the Javits). The two events—last year—took different approaches to the same 3DP set of astounding realities. “Inside 3D Printing New York 2014″ delivered more of the standard, business/professional/commercial approach to a conference and exposition: keynotes, panels, roundtables and exhibitor booths. “3D Printshow New York 2014″ on the other hand—in addition to conf & expo—presented many of the physical/printed “fruits” of 3DP. This included exhibits of the art and science of Additive Manufacturing in concurrent, co-located galleries of museum-style (and very rich!) curations of 3D-printed “artifacts” of disruption. Plus, “Printshow” ran over a weekend and provided explicit access to the “untutored”—but VERY curious—public. (Hey, I took my 5 YO grandson—as my official “cub photog” on Saturday.) The impresarios at “3D Printshow New York 2015″ have tapped me to serve as Conference Chair for their Medical Conference track on Friday, 17 April, from 9 AM to 12:30 PM. Here’s how 3DPS management showcases my participation:

“Land Grant will welcome conference attendees by giving an insight into why Medical & Healthcare content is so important (and exciting) to everyone involved in the international 3DP + AM community – and beyond.”

This Medical Conference—and the larger, multi-track 3D Printshow—will be a event you (NYC3DPers and HCx3DP Synergists) will want to attend. The Med Conf is running from 9 AM to 12:30 PM on Friday, 17 April, at the Center 548, 548 West 22nd Street, NYC. Come on out and join-in!

We’ve decided to focus on two Events only—postponing the others to future dates in the Summer—and have now recruited two excellent teams of Experts to inspire, educate and entertain us. Link directly to these URLs (indented below) on our Meetup.com/HCx3DP-NY Event pages for all the details—RSVP and come join in at one of our two dates at the end of next week:

On 26 March, the MIT Center for Bits and Atoms and the Fab Foundation announced—in a newser at MIT that I attended virtually (including some remote Q&A with Fab Lab Guru Neil Gershenfeld)—that Fab11, the 11th Annual Meeting of the global Fab Lab community, will return to the Boston area from August 3 to 9, 2015. The meeting comprises the annual conference of the international Fab Lab Network, a symposium Making : Impact  that is open to the public, and a 2-day public Fab Festival distributed throughout Boston, Cambridge and Somerville. International Fab Lab Network members from more than 450 labs in over 60 countries are gathering in Cambridge at MIT—the birthplace of the Fab Lab concept. Fab11 will explore how the ability to “Make (almost) Anything”—utilizing Digital Fabrication—is impacting individuals, communities, businesses and collaborative research and projects around the world. At the Fab11 Conference & Symposium, members plan to share technical expertise, best practices, and the powerful stories behind Professor Neil Gershenfeld’s statement “The power of Digital Fabrication is social, not technical.” The Maker Movement—that Professor Gershenfeld’s Fab Lab community has worked to legitimize—is continuing to work at the grassroots to disrupt many segments of our society: for the better… 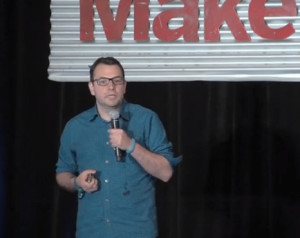 Jose Gomez-Marquez, Program Director for the “Innovations in International Health” initiative at MIT, also leads the Little Devices Lab at MIT, speaking at Maker Faire Bay Area on 23 May 2014 on the topic of “Makers in the Nursing Unit: Lessons Learned from America’s Amazing MakerNurses.”

This medical center-based conference/expo was the first Maker Movement healthcare and 3DP/Additive Manufacturing public event of its kind worldwide. (That’s out of the 135 Maker Faire’s “licensed” by Maker Media in 2014 worldwide—an incredible growth rate from zero in five years.)

Maimo Mini Maker Faire worked because it was a grassroots/nurses-supply-closet integration of interests—with both academic and commercial support structures. This inaugural Faire followed on the advent of one of the first MakerNurse.org chapters—-at the Maimo Medical Center. Just over a year ago, MakerNurse.org was a nascent online organization founded as a brand-new initiative of the Little Devices Lab (as in “medical devices”) of Prof. Jose Gomez-Marquez & Confreres at MIT.

Now, Director Reilly has conceived of another innovation in the Medical/Maker Space: DIY/DIT medical science/healthcare services-based “community” Maker Spaces. The working title for this grassroots-facility initiative is “Health Maker Lab” (HML). The “community” being comprised of both hospital/med center staffers AND hyper-local “citizen scientists.” The probable location would be a private space outside the physical environs of a medical institution. This is for all the reasons that keep “institutions” from fostering inspiration, creativity and innovations. But, an HML should reside/abide geographically close enough to a Healthcare institution to encourage easy physical access, cross-pollinating, common-goal integrations and serendipitous collaborations.

Kelly Reilly has recruited a team of susceptible Maimo colleagues and independent Healthcare-focused players from the wider community to help plan and foster the first HML. I was pleased to be included. We had our first meeting two weeks ago—and I look forward to helping to found the (world’s?) first “Health Maker Lab” in Brooklyn.

On March 23, 2015, the NYCEDC-fostered Entrepreneurship Lab Health and BioTech NYC, ELabNYC, announced its 2015 Pitch Day April 2, 2015. ELabNYC is an annual competitive entry program of entrepreneurship training and networking initiated by NYC Economic Development Corporation. ELabNYC is now supported in a public/private consortium by corporations with a long-term commitment to the development of the “life science ecosystem” in NYC. These players include Kaneka, EisnerAmper, TriNet, Moses & Singer, Pryor Cashman, Roche, Pfizer and Microsoft.

The ElabNYC program starts with an application process. All Applicants to ELabNYC are screened by a national group of scientists, business entrepreneurs, and funders. Background checks and in person interviews continue the screening process. In December, the 2015 class was announced. Since then the 20 invited teams have worked to develop business plans, refine product strategies, recruit team members and identify funding partners.

[On the fly---as usual---so, I'll be building out the rest of this post during today. If any of these last items resonate for you...]